10% of Saudi will be powered by renewable Energy 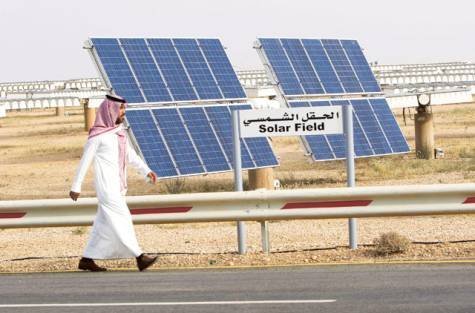 Saudi Arabia wants 10 per cent of its electricity to come from renewable sources within six years as part of a transformation in its power sector, the energy minister said today.

At a forum seeking investment in the sector, he announced “30 projects to be implemented” in order to reach a goal of about 10 gigawatts of renewable energy production early next decade.

Virtually all of the kingdom’s domestic power currently comes from crude, refined oil or natural gas.

But as part of an economic reform plan to wean the kingdom off oil, the government has embarked on what Falih called an “ambitious” renewables programme featuring solar and wind power.

He has said the projects could cost between USD 30 billion and USD 50 billion.“The percentage of renewable energy by 2023 will represent 10 per cent of the total electricity of the kingdom,” he said at the start of the Saudi Arabia Renewable Energy Investment Forum.

He formally opened bids on the first 300-megawatt solar plant under the renewables plan.

The government has shortlisted 51 firms, most of them from abroad, for bidding on that plant and a 400-megawatt wind farm.Another wind project will be launched in the fourth quarter of this year, followed by more solar projects, he told hundreds of delegates.Government estimates say Saudi peak energy demand is expected to exceed 120 gigawatts by 2032. (AFP) AJR