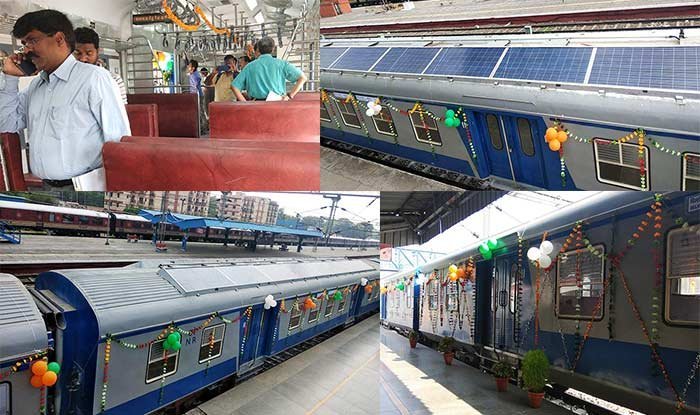 Normally, DEMU (diesel electric multiple unit) trains are powered by on-board engines without a separate locomotive which provides power for its passenger comfort system, i.e. lights and fans, from a diesel-driven generator but not in this one…The entire electrical needs of the India’s first solar-powered DEMU train which includes lights, fans and information display system, will be met by the energy produced by solar panels fitted atop the coaches of the DEMU train.

The DEMU train with six trailer coaches will save about 21,000 Litres of Diesel & thereby bring cost saving of Rs.12 Lac/ year. The newly inaugurated train is the first Train that has solar hotel load system fitted on each coach is of 4.5 KWp capacity consisting of 16 Solar Panels of 300Wp. The DEMU Train with prototype solar based hotel load system has been manufactured by ICF, Chennai and has been fitted with Solar panels by Indian Railways Organization For Alternate Fuels (IROAF).

The IROAF has developed a smart inverterytem s, which optimises power generation on a moving train to cater to full load even during night hours with the help of a battery bank that ensures sufficient electricity. This move is believed to lessen the diesel consumption of the train which would, in turn, reduces carbon dioxide generation by 9 tonnes per coach per year.

Speaking on the occasion at the Safdarjung railway station (New Delhi), Union Railway Minister Suresh Prabhu said it was a “path-breaking leap” towards making trains more environment-friendly. The carrier is also taking a host of other environment-friendly measures like using bio-toilets, water-recycling, waste disposal, CNG and LNG, and harnessing wind energy.