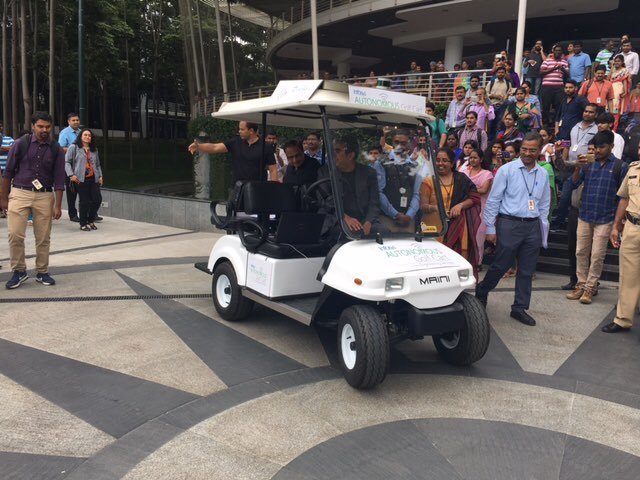 At a recent media briefing by Infosys in Bengaluru CEO & Managing Director, Vishal Sikka showcased a futuristic driverless cart which has been developed at the IT giant’s Mysore campus.

The automatous cart was built to train employees on the latest technological developments in emerging fields like artificial intelligence and machine learning. The golf cart by the company is currently loaded with sensors which is capable of sensing the environment and navigating without any human inputs. It is the advanced control system in autonomous cars that help the vehicles have a correct estimation of the paths as well as obstacles.

The tweet by Sikka saying who says we can’t build transformative technologies, sends out a clear message that this IT and outsourcing giant is all set to make a mark in the driverless car space.

Infosys has reported a consolidated profit for the quarter ending June, and this new addition could be a step by the company to ramp up its revenue further. Interestingly, about 10% of the company’s revenue in this quarter came from new services and software, which pushes the company to work upon these high growth areas.

Sikka has his intentions clear on investing in the cutting edge technologies like autonomous cars, which other tech giants like Google, Tesla and Uber are already plying upon.

The Indian autonomous vehicle industry, however, is still at an embryonic stage, with the government currently working to promote electric cars as a viable, environment-friendly alternative to conventional ones. The government is aiming to make the country a 100% electric vehicle nation by 2030. The endeavour coupled with the indigenous model of driverless car, like the one built by Infosys, proves that driverless cars might be soon arriving in India.