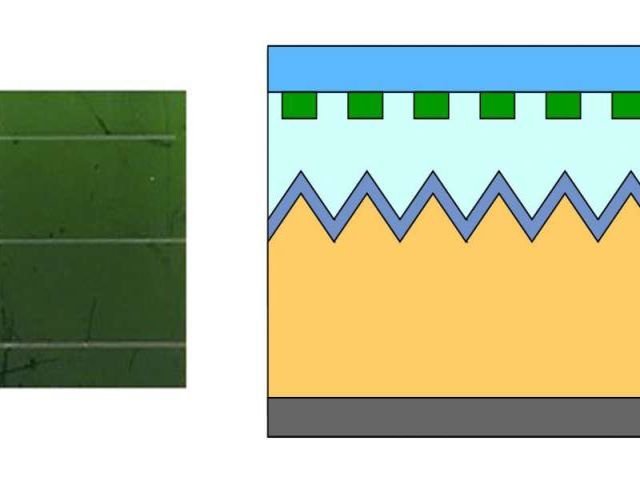 Solar panels have tremendous potential to provide affordable renewable energy, but many people see traditional black and blue panels as an eyesore. Architects, homeowners and city planners may be more open to the technology if they could install green panels that melt into the landscape, red panels on rooftops and white ones camouflaged as walls.

A new study published this week in Applied Physics Letters brings us one step closer to a future of colorful, efficient solar panels. Researchers have developed a method for imprinting existing solar panels with silicon nanopatterns that scatter green light back toward an observer. The panels have a green appearance from most angles yet only show about a 10 percent power reduction due to the loss of absorbed green light.

“Some people say ‘why would you make solar cells less efficient?’ But we can make solar cells beautiful without losing too much efficiency,” said Verena Neder, a researcher at AMOLF and lead author of the paper. “The new method to change the color of the panels is not only easy to apply but also attractive as an architectural design element and has the potential to widen their use.”

Most research on solar cells has focused on increasing efficiency and reducing cost. Currently, the solar panels sold to consumers can ideally turn up to 22 percent of the sun’s light into usable energy. Colored solar panels are already on the market, but the dyes and reflective coatings that give them their color greatly reduce efficiency.

Neder and colleagues created their efficient, green solar panels through soft-imprint lithography, which works somewhat like an optical rubber stamp to imprint a dense array of silicon nanocylinders onto the cell surfaces. Each nanocylinder is about 100 nanometers wide and exhibits an electromagnetic resonance that scatters a particular wavelength of light. The geometry of the nanocylinder determines which wavelength it scatters and can be fine-tuned to change the color of the solar cell. The imprint reduces the solar panel’s efficiency by about 2 percent.

“In principle, this technique is easily scalable for fabrication technology,” said Albert Polman, a scientific group leader at AMOLF and senior author on the paper. “You can use a rubber stamp the size of a solar panel that in one step, can print the whole panel full of these little, exactly defined nanoparticles.”

Unlike existing colored solar panels, the nanopatterns give a consistent appearance from different angles. “The structure we made is not very sensitive to the angle of observation, so even if you look at it from a wide angle, it still appears green,” Neder said.

The nanopatterns also could be useful in making tandem solar cells, which stack several layers, each designed to absorb certain parts of the spectrum, to achieve efficiencies of greater than 30 percent.

Next, the researchers are designing imprints to create red and blue solar cells. Once they master these three colors, the primary colors of light, they can create any color, potentially even white. “You have to combine different nanoparticles, and if they get very close to each other they can interact and that will affect the color,” Polman said. “Going to white is a really big step.”

Sourced from American Institute of Physics