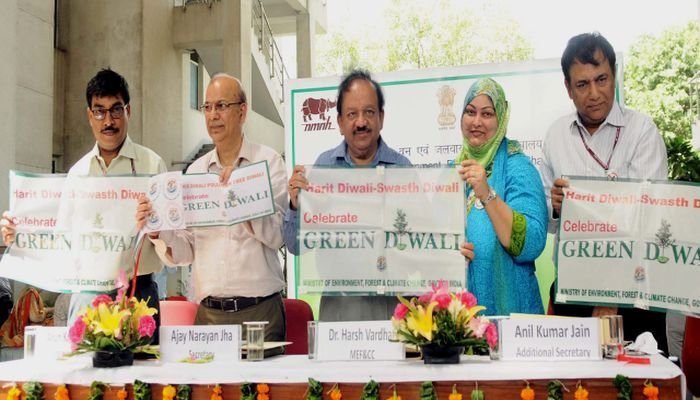 Union Minister for Environment, Forest and Climate Change, Dr.  Harsh Vardhan, launched the “Harit Diwali, Swasth Diwali” campaign, here today.  Addressing a gathering of about 800 children from schools of Delhi and NCR, the Minister impressed upon the children the importance of their contribution towards reducing pollution by not bursting harmful fire crackers during Diwali. Later he also administered a Pledge for a Green and Healthy Diwali to the gathering of students.

As a part of the campaign, the Environment Ministry will undertake various activities to create awareness among various stakeholders and encourage people to participate in combating air pollution.

Diwali is an integral part of our rich tradition and a festival that embodies joy and happiness.  In recent times, the pattern of celebration has changed somewhat and has got associated with excessive bursting of crackers, which contributes significantly to air and noise pollution.  As a result, there has been a significant impact on the environment and health of the people.

As has been the experience in the past few years, airborne pollution has been rising above safe limits during winter in many cities.  The excessive burning of crackers during Diwali aggravates the problem.  The pollution levels in Delhi last year, especially post Diwali, reached such levels that the government had to declare an emergency situation, which had socio-economic consequences like closing down of schools, construction sites and power stations.

Some of the activities to promote Green Diwali include stickers/logo distribution, poster competition, advertisement on public transport systems, public appeal using Radio/FM, involving industry associations and other stakeholders.  As a part of the social media campaign, an online competition will be conducted, where any individual/organisation can make a video/audio clip on the theme ‘Pollution Free Diwali’.  The best of these clips will be used officially to promote the theme across the country.