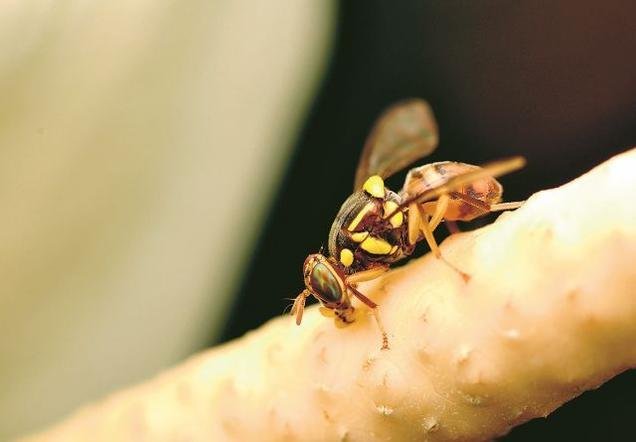 An Israeli company says it has developed a no-spray, environment-friendly solution that can protect Indian farmers from the deadly oriental fruit fly, which has destroyed 300 fruit species in India.

The Oriental Fruit Fly (Bactrocera dorsalis) is considered to be the most destructive, invasive and widespread of all fruit flies, and is also a menace in 65 other countries in Asia, Africa and the Americas.

Attracted by the odour, the fruit fly takes a sip and soon dies, without any chemicals reaching the fruit, air or soil.

“We were hoping to bring a solution that will replace spraying and increase productivity by 50 per cent. I am excited by the results, demonstrating the future potential for some farmers to bring about 900 times more marketable produce to the market,” said the company’s CEO Nimrod Israely.

“We don’t have the Oriental Fruit Fly in Israel. However, until now there was no solution for this problem. So we took the challenge and chose to focus on India,”

Biofeed was one of the six innovative Israeli companies invited to give a demonstration to Prime Minister Narendra Modi and his Israeli counterpart Benjamin Netanyahu during the former’s July visit.

The launch of the company’s attractant for female oriental fruit flies is a result of 15 years of development of the core platform, and more than a year of development and testing in Israel and Karnataka.

Mango farmers on four Indian orchards saw an overall decrease of fruit fly infestation from 95 per cent to less than 5 per cent, the report said.

The company worked with Kempmann Bio-organics in Bangalore to carry out the trial, it said.

“Bactrocera zonata is the number 2 pest in India. There are three main pests in India, so now we’ve given, within two years, a solution for the two most devastating fruit flies in India and in other parts of the world,” Israely said.

“We estimate the annual market potential of these two pest segments to be well over a billion US dollars,” he said.

“This is something that can make a dramatic change in agriculture and human health,” Israely added.