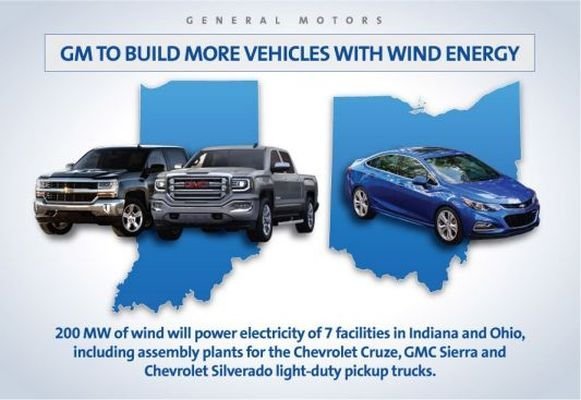 Following the announcement last year that the company intends to source all electricity needs at its facilities worldwide with renewable energy by 2050, General Motors announced the purchase of 200 megawatts of wind energy from wind farms in Ohio and Illinois.

Once the turbines go online next year, 20%  of the company’s global electricity usage will be powered by renewables. The electricity generated will supply seven plants, including those that make the Chevrolet Cruze and Silverado and GMC Sierra light-duty pickups.

Details about the cost for the wind power purchase were not released, but the company noted a connection to the push for zero-emission vehicles. Those include electric vehicles, such as the Chevrolet Bolt.

Starwood Energy Group will provide half of the energy through its Northwest Ohio Wind farm in Van Wert and Paulding counties, and Swift Current Energy will provide the rest through its HillTopper Wind Project in Logan County, Ill., the release said.

GM says it made its first wind power purchase in 2014 for several Mexican facilities; uses solar power at 26 locations; and gets electricity from landfill gas at two assembly plants. The company says it saves about $5 million each year using renewable energy.