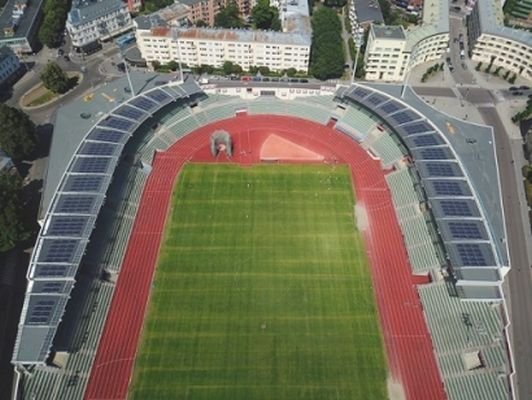 Bislett stadium, which was built between 1917 and 1922. Several championships took place here, for example the European Athletics Championship in 1946 and the Olympic Winter Games in 1952.

In 2004, the old stadium was replaced by a new one. It has a soccer stadium and an athletics site. 3,500 of 15,400 seats are roofed. Now this stadium has been fitted with photovoltaic (PV) installation  so as to fulfill the energy needs of stadium using solar energy. This is in line with Norway’s goal to reduce its CO2 emissions by 40 percent before 2030.

This PV plant has been built using 654 Panasonic modules HIT® N325, consisting of two parts which are installed on the eastern and western side of the stadium. The modules are installed on the tribune roofs. Due to the installation on the flat roofs it was possible to position them in an optimal direction.

In cooperation with Solar Technologies Scandinavia ( a partner of Panasonic Eco Solutions Europe), Abmas Elektro has installed pv systems of about 3 MW power in the last three years.

212 kW photovoltaic system on Bislett Stadium has been in operation since the end of June.