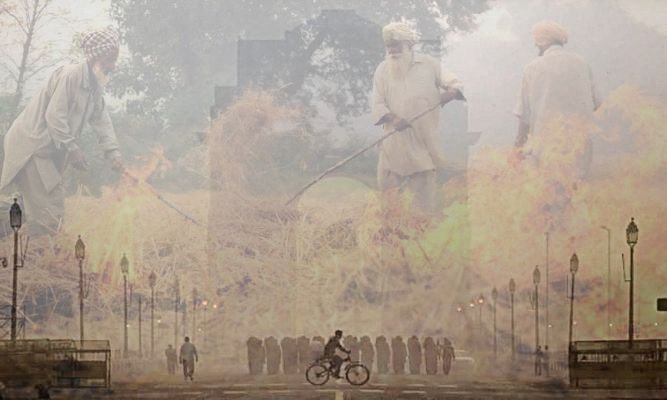 Until a few years ago, when farmers in Punjab burnt the remnants of the rice crops the smoke was confined to Punjab. Back then, farmers burnt the straw in late September and early October.

However, in recent years, farmers have delayed the burning until late October.

The decision to delay the clearing was forced on them by the Punjab government, which passed the Punjab Preservation of Subsoil Water Act in 2009.

According to this law, farmers can sow rice only in the middle of June. Haryana too has copied Punjab and passed a similar law.

This delay is crucial and responsible for the smoke being carried all the way to Delhi.

An analysis of the wind flow patterns reveals that wind blows into Delhi primarily from the west during the monsoon season, but changes direction in October when it starts blowing into Delhi from the north.

The group that has been primarily responsible for exerting pressure to move away from growing rice in the name of “crop diversification” is the United States Agency for International Development (USAID).

Which has a worldwide reputation of behaving like a front group for American multinational corporations such as Monsanto. It should, therefore, come as no surprise that Monsanto will be the primary beneficiary of USAID’s purported solution for Punjab’s problems.

According to their solution, farmers need to stop growing rice and replace it with Monsanto’s genetically modified (GMO) maize.

Monsanto now offers the replacement of rice by its GMO crops as a solution that will increase the level of subsoil water, but the multinational corporation is the cause of the problem.

Its fertilizers and pesticides have accumulated in the ground over the years, and this has led to poor retention of moisture in the soil, leading farmers to pump out excessive amounts of underground water.

The new law, reducing the time period during which farmers are permitted to grow rice, has further accentuated this problem.

For now, a step that should be taken immediately in order to prevent Delhi from becoming a gas chamber for several days every November, is to revoke what should rightfully be called the Monsanto Profit Act of 2009 and permit farmers to sow their rice crop whenever they deem it fit to do so.

Before this law was passed, the problem in Delhi was limited to vehicular and industrial pollution, apart from smoke from bonfires in winter, and there were no reports of the entire metropolitan area being enveloped by smoke.