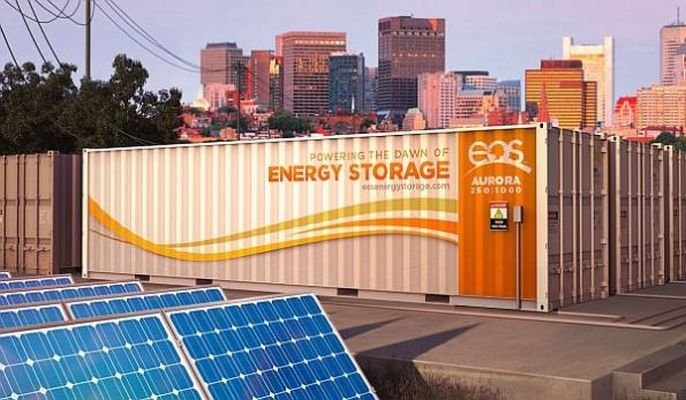 After a new team of former GE executives has taken the helm at Eos Energy Storage. The New Jersey-based company has delivered a series of kilowatt-scale pilots and established a domestic manufacturing base in Pittsburgh.

After 12 years and $160 million raised, Eos has reached an inflection point. It’s no longer proving its technology, but rather is now ramping up for industrial-scale manufacturing, and that requires a different kind of liquidity.

Eos has spent the last 12 years developing what it calls a “zinc hybrid cathode” device. This Znyth™ technology is built on 21 patents and patent applications with over 600 claims covering cell configuration and architecture, cathode design and materials, electrolyte and electrolyte additives, battery management systems, and low-cost manufacturing processes.

Each cell uses a carbon felt cathode that plates zinc onto a ceramic-coated titanium current collector, all of which sits in a proprietary electrolyte solution.

This is a static system, in contrast to flow batteries with their pumps and plumbing.

Unlike lithium-ion, it needs no HVAC system to maintain safe operating temperatures, and it can go all the way from zero to 100 percent state of charge.

A few other battery startups targeted zinc as a cheap active material — ViZn Energy, Fluidic and e-Zinc, for instance.

The Eos chemistry is best suited for daily charge and discharge operations that can take advantage of the full 100 percent depth of discharge capability.

That could carve out space for daily solar-shifting or backup power applications where the battery cycles every day to reduce peak charges.