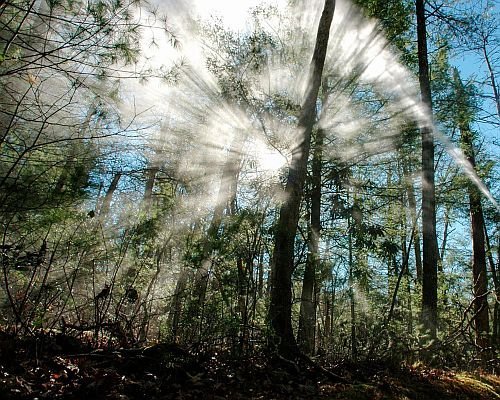 Climate change has increased the productivity of forests, according to a new study that synthesizes hundreds of thousands of carbon observations collected over the last quarter century at the Harvard Forest Long-Term Ecological Research site, one of the most intensively studied forests in the world.

The study reveals that the rate at which carbon is captured from the atmosphere at Harvard Forest nearly doubled between 1992 and 2015.

The scientists attribute much of the increase in storage capacity to the growth of 100-year-old oak trees, still vigorously rebounding from colonial-era land clearing, intensive timber harvest, and the 1938 Hurricane—and bolstered more recently by increasing temperatures and a longer growing season due to climate change.

Trees have also been growing faster due to regional increases in precipitation and atmospheric CO2, while decreases in atmospheric pollutants such as ozone, sulfur, and nitrogen have reduced forest stress.

The data show that the growth of trees is the engine that drives carbon storage in this forest ecosystem. Soils contain a lot of the forest’s carbon—about half of the total—but that storage hasn’t changed much in the past quarter-century.

It is remarkable that changes in climate and atmospheric chemistry within our own lifetimes have accelerated the rate at which forest are capturing CO2 from the atmosphere.

The volume of data brought together for the analysis—by two dozen scientists from 11 institutions—is unprecedented, as is the consistency of the results.

At Harvard Forest, hemlock-dominated forests were accumulating carbon at similar rates to hardwood forests until the arrival of the hemlock woolly adelgid, an invasive insect, in the early 2000s.

In 2014, as more trees began to die, the hemlock forest switched from a carbon “sink,” which stores carbon, to a carbon “source,” which releases more CO2 to the atmosphere than it captures.