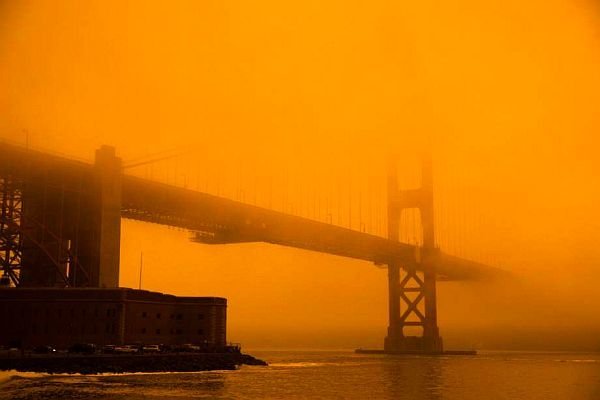 With wildfire smoke high aloft in the atmosphere, the sky was a sickly yellow yesterday, but today a thicker blanket of toxic air is traveling overhead and the color turned an even stranger, richer, orange hue.

Extremely dense & tall smoke plumes from numerous large wildfires, some of which have been generating nocturnal pyrocumulunimbus clouds (‘fire thunderstorms), which have almost completely blocking out the sun across some portions of Northern California.

The sun isn’t expected to make an appearance for several days, according to meteorologists. Health officials are instructing residents to stay inside, and avoid outdoor activity, with air conditioners on and windows and doors closed.

Because the fires are farther away from the Bay Area, the smoke is getting lofted high into the atmosphere and doesn’t smell like smoke. The mass of polluted air hovered above a marine layer in the early morning that pushed inland from the Pacific Ocean overnight.

Strong northerly winds are injecting smoke from fire in Northern California into the upper levels of the atmosphere and pushing it south to the Bay Area.

The fires are raging with such a  ferocity, in fact, that they can be easily spotted from space. A single gigantic cloud of dust recorded on September 6 even started obscuring all other scientific readings.

In sum, it’s a climate catastrophe that has come home to roost — despite decades of evidence. We can no longer assume that there will always be a habitable planet for us — because unless we enact major changes now, there won’t be.