“Zombie Storms” Are Becoming More Frequent Due To Climate Change 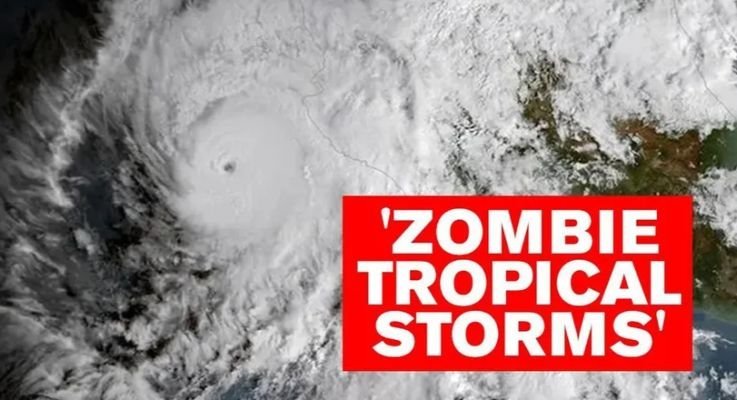 The year 2020 has one more trick up its sleeve: “zombie storms” – The storms which regain strength after initially petering out. And these undead zombie storms are becoming more common thanks to climate change.

As their eerie name suggests, according to the National Weather Service, the rare weather phenomenon occurs when strong tropical climates cause storms to come back from the dead.

That’s essentially what happened to Hurricane Paulette. The storm landed in Bermuda weeks ago as a Category 1 storm, intensified to a Category 2, and then lost speed.

Then last week, Paulette joined the living dead by strengthening into a tropical storm once more, according to the National Hurricane Center. She made yet another reappearance about 300 miles off the Azores islands.

In other words, rather than dying out as they usually do when they hit land or cooler waters, storms are regaining energy from much warmer waters in the Caribbean.

In this case, however, Paulette bumped into a high-pressure trough in the mid-Atlantic that pushed the storm south, where it encountered warm water that enabled it to re-form as a tropical storm.

And as with other natural disasters that have been intensifying in recent years, such as wildfires and hurricanes, climate change and rapid global warming are to blame.for making such freak occurrences more frequent, especially considering an “extreme amount of heating of the Gulf (of Mexico).