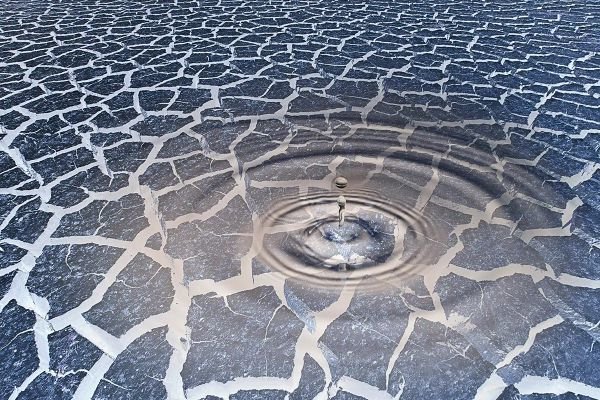 Researchers at MIT and elsewhere have significantly boosted the output from a system that can extract drinkable water directly from the air even in dry regions, using heat from the sun or another source.

The system, which builds on a design initially developed three years ago at MIT by members of the same team, brings the process closer to something that could become a practical water source for remote regions with limited access to water and electricity.

The earlier device provided a proof of concept for the system, which harnesses a temperature difference within the device to allow an adsorbent material—which collects liquid on its surface—to draw in moisture from the air at night and release it the next day.

But that device required the use of specialized materials called metal organic frameworks, or MOFs, which are expensive and limited in supply, and the system’s water output was not sufficient for a practical system.

Now, by incorporating a second stage of desorption and condensation, and by using a readily available adsorbent material, the device’s output has been significantly increased, and its scalability as a potentially widespread product is greatly improved, the researchers say.

Instead of the MOFs, the new design uses an adsorbent material called a zeolite, which in this case is composed of a microporous iron aluminophosphate.

The two-stage design makes clever use of the heat that is generated whenever water changes phase. The sun’s heat is collected by a solar absorber plate at the top of the box-like system and warms the zeolite, releasing the moisture the material has captured overnight.

That vapor condenses on a collector plate—a process that releases heat as well. The collector plate is a copper sheet directly above and in contact with the second zeolite layer, where the heat of condensation is used to release the vapor from that subsequent layer.

Droplets of water collected from each of the two layers can be funneled together into a collecting tank.

While similar two-stage systems have been used for other applications such as desalination, no one has really used such a system for atmospheric water harvesting (AWH).