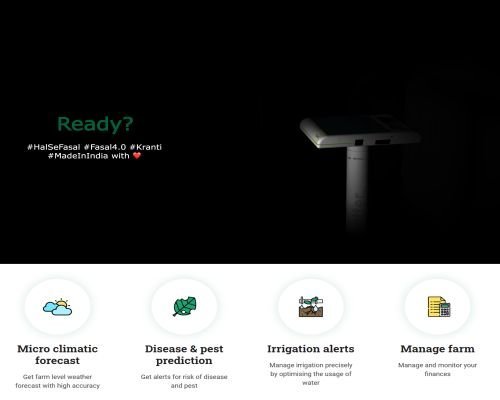 From preventing mildew before its arrival to conserving water, Fasal’s devices are helping farmers adopt new ways. According to Fasal, the deployment of its IoT devices on 10,000 acres of farmland so far has saved 3 billion litres of water.

Fasal is the pioneer of precision farming and is an IoT based AI-powered intelligence platform for horticulture crops. It captures real-time data on conditions from on-farm sensors to deliver farm-specific, crop-specific and crop-stage specific actionable recommendations to farmers.

Right now, the irrigation is dependent upon the guesswork of the farmers. Soil may look dry on the top level but retains water at the root zone causing farmers to over irrigate.

They are bringing “optimal irrigation” in action by eliminating guesswork and using a “Data-Driven” approach, in result, leading to better quality and an increase in crop yield by up to 40%.

The IoT device keeps an hourly track of the water tension at the primary rootzone, If the water level exceeds the system triggers action for farmers through Fasal app.

Every farmer who maintains water below this level for a maximum hours in a month, Fasal will refund his/her entire monthly subscription that is charged for the advisory.

In essence every time a farmer saves water for India he makes money for himself.

The first prototype of its solar-powered IoT device was deployed at a vineyard near Bengaluru that produces premium wine. Then they did pilots with vegetable growers in Chhattisgarh in 2018.

But it’s a beginning…