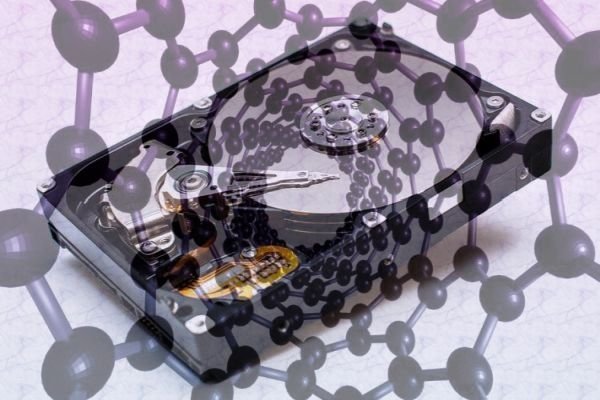 Graphene, which is a material made of a one-atom-thick layer of carbon, is a bit of a buzzy darling in the material sciences community, to the point that it’s nearly a meme to implement it in just about anything, whether it’s computers, batteries, or outerwear, that needs a high-tech update.

But this time, it does seem to make a significant difference…

A team of scientists led by the University of Cambridge has developed a new ultra-high density hard drive that they say has ten times the data storage of other leading drives — thanks to an ultra-thin coating of graphene. The Cambridge research could herald a new era of ultra-powerful hard drives that make today’s storage issues seem trivial.

Hard drives are essentially made of rapidly spinning platters that are protected by carbon-based overcoats (COCs). As technology has improved, manufacturers have made those carbon layers thinner and thinner.

But there’s still room for improvement: swapping the COCs out for even thinner layers of graphene means less filler bulk and more physical space that can be reallocated for data storage, according to a press release.

And, it turns out, graphene still works just fine as a protective coating, so there’s very little tradeoff from abandoning COCs for graphene.