Why flyovers in Chandigarh is unsustainable and will not solve traffic congestion? 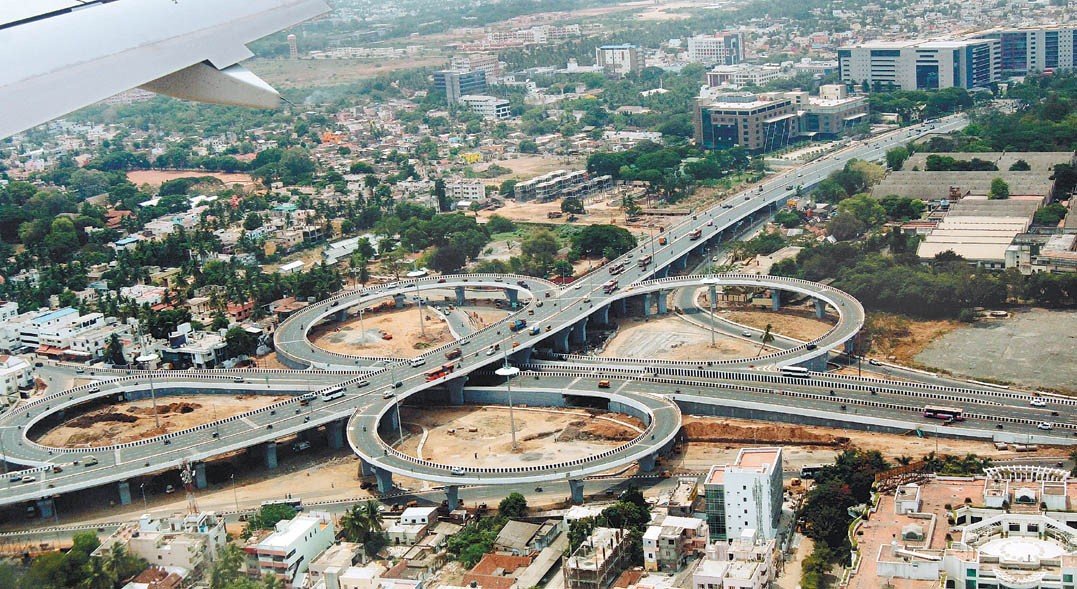 Building a flyover to solve traffic congestion is literally like pouring kerosene to douse a fire and while it may sound a bit awkward, global research has shown that creating additional road space to solve congestion fails as it attracts additional vehicles of road due to latent demand like kerosene which increases the flames. Therefore, any benefit that might result by way of increased average speeds for motor vehicles due to flyovers or new road space in the city is quickly neutralised over a few years, leading to growing motor vehicle activity, increased congestion and greater pollution. While few progressive cities around the world have realised this mistake and instead of creating flyovers or elevated road inside the city they are infact demolishing such structures that were built in the last century. However, cities in developing countries including India have still not learnt this basic economic concept of ‘supply creating its own demand’ and are still stuck in this vicious cycle including Chandigarh.

Chandigarh was conceived as ‘Garden City’ by Corbusier and the master plan was analogous to a human body, with administrative buildings are in the “brain” at the northern end, while commercial facilities located in the central parts as the “internal organs”, parks acted as the ‘lungs’ while streets were the ‘arteries’ of the city. The administration is now looking to plan a flyover at Tribune Chowk as the ‘artery’ appears to be chocked and hence it needs a ‘stent’ but this is exactly where the ‘urban cardiologist’ are going wrong. When a human being is being diagnosed with blockage in the artery, the first the cardiologist advises is the change the lifestyle and go on diet and depending of the severity of the blockage he prescribes stent, bypass of diet control and even if he prescribes and medical procedure, diet control is an integral part otherwise the blockage will keep coming.

Cities across the country looks at Chandigarh as a bench mark for city planning and design and if it starts copying their solution it will not only loose its creditability but is will also start following a path of unsustainability.   Therefore, the solution to Chandigarh lies in the decade old National Urban Transport Policy that clearly emphasis that cities should plan for the people rather than vehicles by providing sustainable mobility and accessibility to all citizens which is creating infrastructure for walking, cycling and public transport along with restriction of use of private automobiles. Some may argue this to be theoretical but there are enough global examples to suggest this strategy works and works very well.

Take the example of the Cheonggyecheon Freeway in Seoul. In the 1950s, Cheonggyecheon River, bordered by a slum and used as a dumping ground, became an eyesore of polluted water. The local authorities decided to cover up the river and build a four-lane elevated freeway on it. What followed four decades after the construction was contrary to what had been envisioned. It led to the deterioration of the Cheonggyecheon area with increased traffic, noise and air pollution. Today, the highway is gone, and the river has been rehabilitated. The resulting green space is a source of urban pride, and motor vehicle travel times have improved and the 1.5 odd lach vehicles that were using the road have ‘disappeared’.

It’s not only Seoul but many cities such as San Francisco, Boston, Milwaukee, Trenton, Portland and Chattanooga in the United States, and Vancouver and Toronto in Canada, had also built elevated highways between 1950 and 1980 only to pull them down later to make more space for pedestrians. Melbourne and Auckland too have removed some of their flyovers. Over 30 years ago, Portland in North America decided to raze the Harbour Drive freeway and replace it with a 37-acre park, making it the first city in the US to initiate the idea of freeway demolition. It is estimated that over 108 flyover or elevated projects have been demolished worldwide.

Copenhagen was at the same juncture in 1970s as probably Chandigarh is right now and the city made a conscious choice that instead of building road for cars it will build streets for bicycles and today Copenhagen has more bicycles than people, emulating The Netherlands. Many parts of the capital city are closed to vehicles. The city plans more no-car zones, is building new bicycle lanes, will remove car parking slots and introduce steep congestion charges.

Bogotá, the capital of the Latin American country Colombia introduced multiple improvements in their public and non-motorized infrastructure and services, as well as travel demand management strategies, over the last 20 years instead of focusing on moving cars.  In 1998 the city introduced a plate restriction for cars, increased the gasoline tax to 25%, banned on street parking, and initiated the construction of a very high capacity BRT system which currently serves 112 km, and extensive network of protected bicycle tracks which has grown to 400 km along with an extensive recovery of footpath which were encroached by parked vehicles and hawkers.  Due to these policies Bogotá has managed to keep public transport around 70% and private vehicle use below 20%, when most developing cities witness decline in public transport in favor of cars and motorcycle use.

London has focused on reducing car use and improving public and non-motorized transport since 2000. In 2003, Mayor Ken Livingstone introduced congestion charge in the downtown area and electronic integrated ticketing for public transport. Since then, the city has gradually improved bus services through priority measures and improved management, and has created bicycle infrastructure, including 8 cycle superhighways, as well as a public bicycle system, launched in 2010. London shows a steady increase in public and non-motorized transport shares since 2000, and a decline in private vehicle use from 15% in 2000 to 7% in 2014.

Enrique Penalosa, the former mayor of Bogota who was re-elected this year once said that ‘there are two ways to destroy a city. One is through nuclear bombing, and the other is with elevated roads’. Hence, the solution to traffic congestion is not road widening or more flyovers, but better public transport, and incentives for people to use public transport, or even cycle and walk to destinations that aren’t that far off.

contributed by -Sarika Panda Bhatt is project manager at WRI-India.