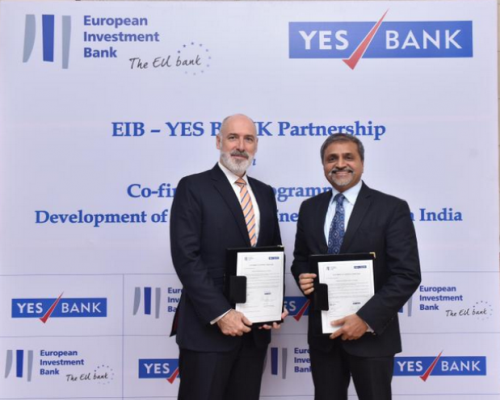 The European Investment Bank (EIB) and Yes Bank will co-finance solar and wind energy projects in the states of Karnataka, Telangana, Maharashtra, and Rajasthan. The projects presumably will have access to cheaper debt finance compared to the rates being offered by Indian banks due to the collaboration with EIB. All the four states have witnessed continued activity in the competitive auctions segment and the successful project developers will be in dire need for cheap debt.

The two banks will provide a total of $400 million (Rs 2,560 crore) to the renewable energy projects. The amount would be sufficient to support 500-600 megawatts of solar and wind energy capacity assuming a capital cost of Rs 6 crore ($0.94 million) per megawatt.

Yes Bank has been a pioneer in terms of clean energy funding in India. It was the first bank in India to launch a green bond back in February 2015. The bank has raised at least $250 million through three green bond issues in collaboration with International Finance Corporation and FMO, the development bank of Netherlands.