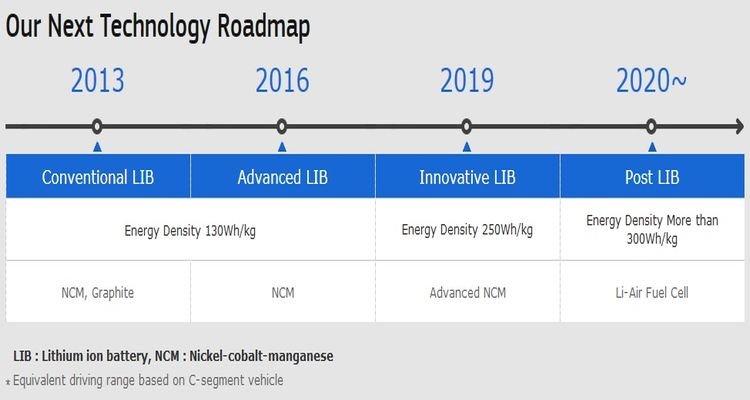 Later, oxides of nickel, manganese, and iron were used. Lithium chemistries are assigned names like NMC (Nickel Manganese Cobalt), NCA (Nickel Cobalt Aluminum), or LiFePO (Lithium Iron Phosphorus) to distinguish one another. Often, lithium is dropped from the designation.

Up until now, Tesla has used NCA cell chemistry for its long-range vehicles as NMC has recently gained improved energy density, it is now poised to be used more frequently in long-range EVs.

NMC 111 means equal parts nickel, manganese, and cobalt. The relative amounts of those elements determines the characteristics of the battery.

The effect is noted in the triangle diagram above. Researchers are targeting 250 Wh/kg and beyond for long-range electric vehicles using nickel-rich cathodes to increase energy density, while reduction in cobalt is also helpful since it lowers costs.

The planned increases in NMC 811 energy density brings it to levels higher than the current Tesla/Panasonic NCA batteries used in the Model S and X. But NMC performance does not need to go that far to have an impact. The NMC cycle life shown is greater than NCA and potentially also lower cost.

A number of battery makers have announced their plans for NMC 811 batteries, with roadmaps presented including LG Chem, Samsung SDI, SK Innovation, and CATL.