Solar Panels that can Generate Power from Raindrops 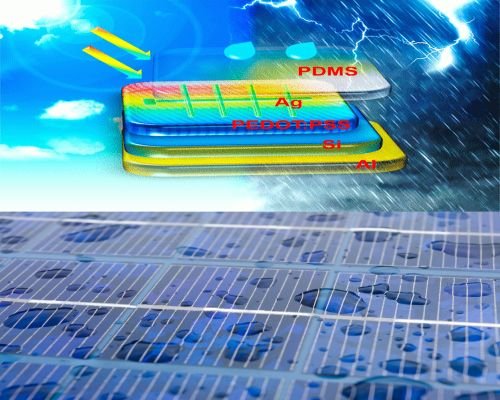 Solar panels are designed to convert sunlight into electricity. But when it’s cloudy or rainy, they’re rendered useless.In fact one of the biggest problems plaguing the widespread adoption of solar power is, quite simply, rainy weather.

A group of researchers from Soochow University in China has come up with a promising solution to that problem: they’ve developed solar panels that can generate power from raindrops.

A technology known as a triboelectric nanogenerator, or TENG, could get added to a solar panel to capture energy from the motion of raindrops that hit it.

Nanogenerators, in simple terms, are devices that convert mechanical energy, or movement, into usable electricity. The TENG would do that on a very small scale for raindrops.

The researchers developed a hybrid solar panel that incorporated the TENG technology yet was still lightweight and cheap enough to mount on roofs. To accomplish this, they experimented with different transparent plastics, or polymers, that form a layer between the TENG layer and the solar cells on a panel.

The layers were connected but could function independently — making it possible for the solar panel to generate electricity in a range of weather conditions.

If the researchers can figure out how to bring down the cost of production of such a product, the technology could potentially revolutionize how solar panels are used. It would make solar power an efficient clean-energy solution even in less sunny areas that aren’t currently considered ideal for solar-energy collection.

The price for installing commercial solar panels — those used by companies like Apple, Walmart, and Amazon — has fallen by over 58% since 2012.