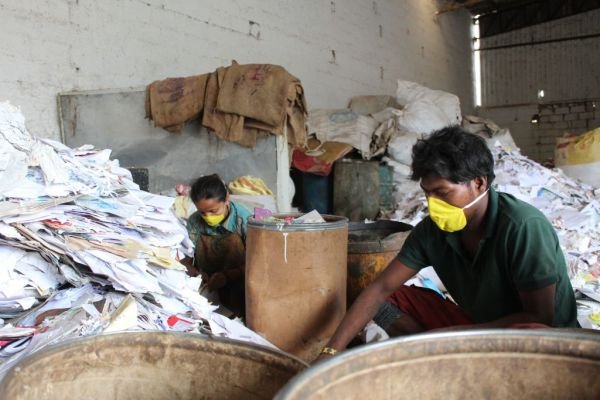 Every major Indian city, including metropolises like New Delhi, Chennai and Mumbai currently depend on landfills to dispose their waste. It is estimated that only 12% of the waste generated in Indian cities is scientifically disposed.

In November last year, the Bruhat Bengaluru Mahanagara Palike (BBMP) released a ‘Solid Waste Management Manual’, a comprehensive document on its efforts to tackle this crisis. On paper, a well-thought out plan exists to manage waste in Bengaluru. In practice, however, things tend to be a little different, with the BBMP notching up an erratic record when it comes to dealing with the various stakeholders of the waste management system in the city.

Of all the people who are part of the system, perhaps the worst off were the waste workers. With no official employment, absent from any sort of payroll, they were largely left to fend for themselves. Despite the stigma attached to their work in India, waste workers are estimated to save 14% of the annual municipal budget and reduce the carbon footprint of our cities, by salvaging and recycling materials from unsegregated trash.

Due to the efforts of activists around the country, the Ministry of Environment and Forests, through the Solid Waste Management Rules of 2016, has directed local government bodies to absorb waste workers from the informal sector.

In June 2017, the BBMP became the first local government body in India to take steps in this regard, when it signed a MoU with 40 waste workers, authorising them to run the Dry Waste Collection Centre (DWCC) in the city.

Under a decentralised system, the BBMP envisions a DWCC for each of the 198 wards in Bengaluru, to deal exclusively with dry waste. It claims that 166 of these centres are operational already, contributing to the segregation of trash that does take place in the city.

Even so, the system is far from perfect. The waste workers running the DWCCs receive no financial assistance from the government, and are offered minimum institutional support.