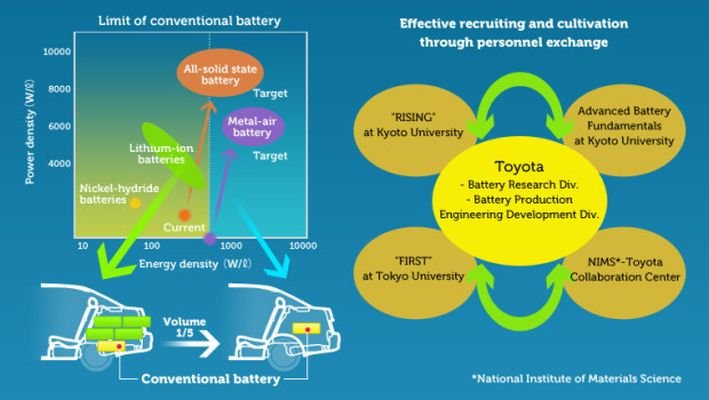 The Japanese government has created a new research entity known as the Consortium for Lithium Ion Battery Technology and Evaluation Center, or Libtec. Working in conjunction with major Japanese manufacturers such as Toyota, Honda, Panasonic, and Yuasa, its mission is to push forward with research into solid state batteries that will cost less and have longer range than conventional lithium ion batteries in use today.

The government is putting up $14 million, which will be distributed by the Ministry of Economy, Trade and Industry to Libtec, whose members include Asahi Kasei and Toray Industries. The goal is a solid state battery with a range of 550 kilometers by 2025 and 800 kilometers by 2030.

In theory, solid state batteries should cost less to manufacture and come with a reduced risk of fire compared to traditional lithium ion batteries. They also may not need the complex temperature management or crash protection structures that today’s batteries do. That could help make the electric cars of tomorrow lighter, which would translate into longer range.

In 2013, Japanese battery manufacturers had 70% of the global market. Today, that percentage is down to 41%. China, which had just 3% of the market in 2013, now has a 26% market share. Korean battery companies have also become a force in the marketplace during that period.

The falling market share of Japanese battery companies is now of greater concern to Japanese Government so this initiative.