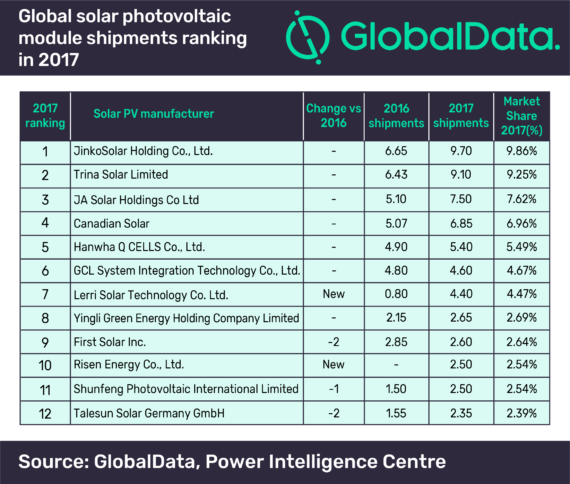 Chinese solar PV manufacturing giant JinkoSolar has been confirmed as the world’s leading solar PV module supplier according to new figures released by leading data and analytics firm GlobalData, accounting for nearly 10% of the global market share and shipping 9.70 gigawatts (GW) of PV in 2017.

This is JinkoSolar’s second year atop the pile with shipments of 9.7 GW for 2017. The company ranked ahead of Chinese Trina Solar which shipped 9.10 GW in 2017 and Shanghai-based JA Solar, which shipped 7.50 GW.

The company has maintained its top position in terms of solar PV research and development through its advanced manufacturing process, higher mass production speeds, and enhanced quality control compared to its counterparts.

In fact, just over a month ago, JinkoSolar published its financial results for 2017 and showed off its mammoth solar shipments for the year, which the company actually pegged at 9,807 megawatts (MW).

JinkoSolar’s stellar 2017 is likely to put it in a strong position to lead through 2018 as well, but the other companies on GlobalData’s list are in a similarly strong position. Trina Solar is also well-placed with strong product quality and reliability, performance, and innovation.