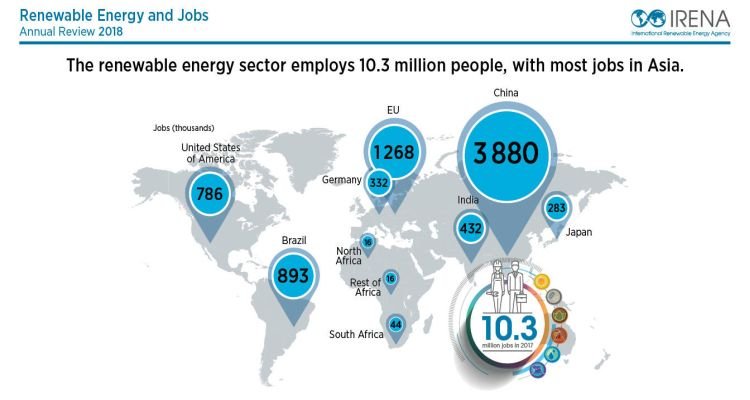 The renewable energy industry created more than 500,000 new jobs globally in 2017, a 5.3 per cent increase from 2016, according to the latest figures released by the International Renewable Energy Agency (IRENA).

China, Brazil, the United States, India, Germany and Japan remain the world’s largest renewable energy employers, representing more than 70 per cent of all industry jobs globally. Sixty per cent of all renewable energy jobs are in Asia. Fundamentally, this data supports that decarbonisation of the global energy system can grow the global economy and create up to 28 million jobs in the sector by 2050.

The solar PV industry remains the largest employer of all renewable energy technologies, accounting for close to 3.4 million jobs. Despite a slight dip in Japan and the United States, the two countries followed China as the largest markets for solar PV employment in the world. India and Bangladesh complete a top five that accounts for around 90 per cent of global solar PV jobs.

Jobs in the wind industry contracted slightly last year to 1.15 million worldwide. China accounts for 44 per cent of global wind employment, followed by Europe and North America with 30 and 10 per cent, respectively. Half of the top ten countries with the largest installed capacity of wind power in the world are European.

“Renewable energy has become a pillar of low-carbon economic growth for governments all over the world, a fact reflected by the growing number of jobs created in the sector.”