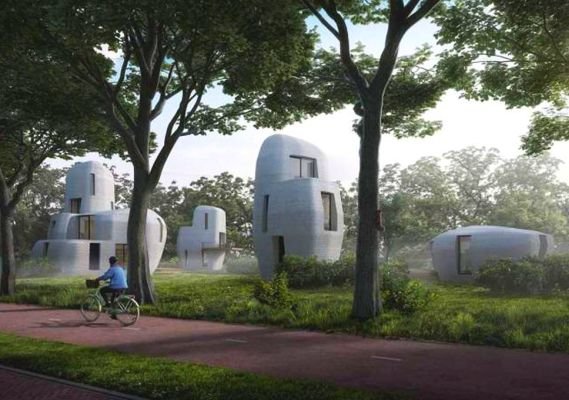 3D printing is becoming a staple in a vast number of different industry applications — from liquid metal fixtures for spacecraft to 3D printing living tissue. It’s even possible to build entire houses using massive, industrial-scale 3D printers – but they have yet to gain permanent inhabitants.

A Dutch construction company called Van Wijnen is 3D printing the first homes in the world that are actually habitable (i.e. able to pass a home inspection) — at least so they claim.

Dubbed Project Milestone, the futuristic homes will be 3D printed near the city of Eindhoven. Currently, there are five houses in total, each with a unique shape and size that shows off the flexibility of the cutting-edge tech.

Since the printer is essentially a giant concrete nozzle that moves along a two-dimensional track high up in the air, architects are able to design homes in pretty much any shape they like. Right now, the homes are printed in pieces off-site, then transported to their final destination. Towards the end of the project, the team hopes to make further adjustments by bringing the printer on-site.

The simplified assembly isn’t the only advantage 3D printing has to offer over conventional building methods. The process requires less workers, keeping costs down and accidents to a minimum. Further, the amount of cement, and transportation required are kept to a bare minimum, reducing the environmental impact. However more research has to be done to fully deem 3D printing technology a success.