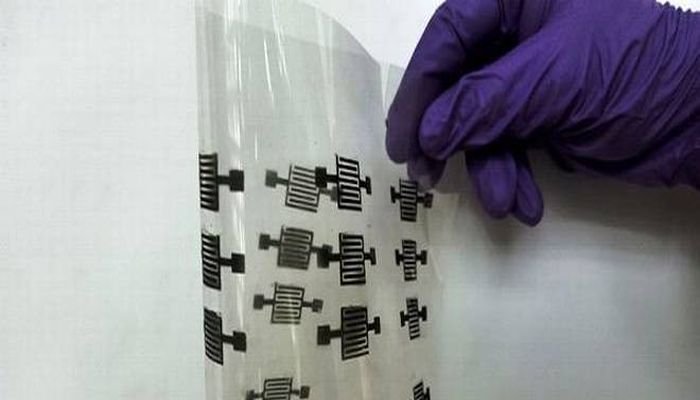 Flexible, lightweight and highly efficient micro-supercapacitors have been developed by Indian scientists, for potential use in advanced miniaturized digital devices.

A team of scientists led by Prof Abha Misra at the Indian Institute of Science, Bangalore has developed energy efficient, compact, flat micro-supercapacitors which can be fabricated on flexible substrate by simple spray deposition technique. Their findings have been published in the journal ACS Applied Materials & Interfaces.

Unlike batteries which generate electricity through chemical reactions, supercapacitors store energy efficiently via both electrochemical reaction as well as formation of double charge layer phenomena to provide much higher power density. Micro-supercapacitors developed so far are bulky and can only store limited amount of energy due to availability of limited space and complicated fabrication processes. Reducing the size of micro-supercapacitors without losing efficiency is a major challenge. The simple and cost-effective spray deposition technique developed by IISc scientists overcomes these issues.

Spray deposition is a technique where ink of nanomaterials such as carbon nanotubes, reduced graphene oxide and manganese dioxide is sprayed on substrates such as metals and polymers. The layer-by-layer patterning of hybrid nanomaterials ink increases the overall charged surface area thus offering large surface-to-volume ratio and boosts the movement of charges, making the overall energy storage capacity higher.

Currently used supercapacitors can’t compete with batteries in energy storage; a supercapacitor with the same storage capacity as a regular battery would weigh up to 40 times as much. To make them light and efficient, researchers use materials such as carbon nanotubes or reduced graphene oxide to prepare the electrodes. Using traditional lithography or etching, however, creates bulky structures with less surface area for charges to move. The scientists demonstrate the technique by fabricating micro-supercapacitors coated on a bendable plastic sheet.

“We can actually print these micro-supercapacitors anywhere, on any substrate; thus, they can easily be mounted on any surface just like a simple spray on the walls,” said Prof Misra. “We can achieve the power density of up to 100 microWatts per square centimeter based on the new fabrication method,” she added.

Moreover, the micro-supercapacitors can also be recharged many more times than the usual batteries and thus have longer life. “They can be charged and discharged more frequently as compared to battery. We have measured up to 10,000 cycles, certainly it can be extended further based on the requirement”, Misra explained while speaking to Indian Science Wire. The scientists have also bent micro-supercapacitors to different angles and have demonstrated stable energy storage capacity them to retain the power in spite of bending.

Where will they find the use? The immediate application of foldable micro-supercapacitors is in flexible electronic displays such as LED television. But with smart packaging it can be used in any kind of devices. Or still better is to build electronics on the micro-supercapacitor itself, what scientists term as on-chip MSC, doing away with a separate battery. “Definitely, this type of in-plane MSC can be used in green vehicles by integrating them in series and parallel connections. The MSCs can also be integrated with traditional battery to provide more efficient and a longer cycling life as compared to battery alone for use in green vehicles”, Dr. Buddha Deka Boruah, a member of the research team explained.