20 Ghats In Kanpur And Bithoor Inaugurated 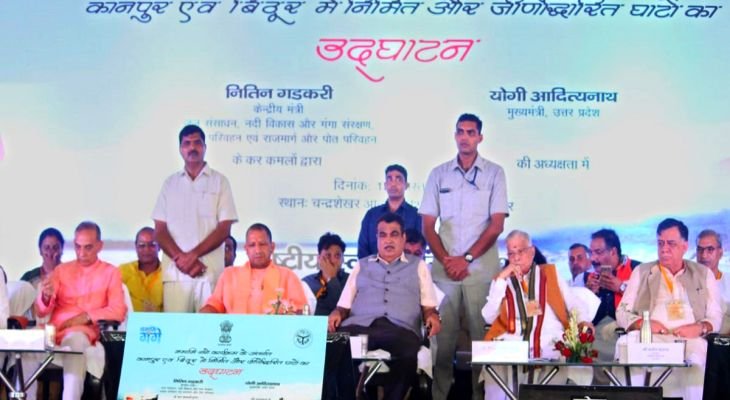 Shri Gadkari announced that a20 MLD Common Effluent Treatment Plant (CETP) has been approved for Jajmau at an estimated cost of Rs. 554 crore (phase-1) for the treatment of effluent from tanneries.In addition, he also announced that the complete tapping of Sisamau Nala would be done by October this year. 140 MLD of sewage from this nalla used to fall untreated into Ganga earlier. Of this, 80 MLD of sewage has already been diverted to Bingawan STP. The remaining diversion will be complete by October this year.

Speaking at a ceremony at Chandrasekhar Azad University in Kanpur today, Shri Gadkari said that his Ministry is fully committed to cleaning Ganga and its tributary rivers, and there is no shortage of funds for this purpose. Stressing upon the need to create wealth from waste he said that methane from the sewage in Kanpur can be used for generating Bio-CNG, which can in turn be used for running the city transport.

For the first time, One-Cluster-One-Operator approach has been taken to ensure accountability in operation of STPs and long term sustainability.

In order to improve cleanliness, silt removal and proper upkeep of Ghats in Kanpur and Bithoor zone, NMCG has recently sanctioned a project for regular cleaning of Ghats for 3 years at an estimated cost of Rs. 6.07 crore. A trash skimmer for removal of floating trash is already deployed in Kanpur for river surface cleaning.

This is a PIB News Feed edited by ‘Clean-Future Team’