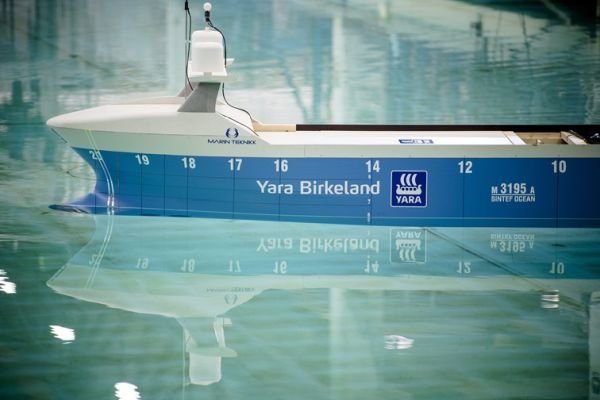 The ‘Yara Birkeland’ which has been commissioned by the Norwegian fertilizer manufacturer Yara International, will be the world’s first autonomous electric container ship, and will no doubt change freight transport at sea.

According to Yara International, the electric ship should be able to replace a total of 40,000 truck journeys a year. Though it’s not a particularly large cargo ship, 70 meters long and 14 meters wide with 120 containers on board, the difference is there won’t be any people on board, which allows for more of the space to be utilized for shipping cargo.

The software and engineering is to be provided by The Kongsberg Group, a major provider of military technology and autonomous control systems, and the Romanian Vard shipyard will build the freighter itself.

The batteries will hold seven and a half to nine megawatt hours — the same as up to 90 batteries from the Tesla Model X P100D.

The battery technology is still insufficient for long distances, so the ship will only make short routes. Water currents also affect the consumption of energy, making it difficult for electric boats or ships to travel long distances without places to stop and charge. As technology advances, we will hopefully see more and more solutions that will allow ships to travel even longer distances.

Norway has supported the Yara Birkeland with 133.6 million Norwegian kroner — or just under 14 million euros — which is a sizeable chunk of the total project cost of 27 million euros.

The ship will be delivered in 2020 and plans are for it to be fully autonomous and operational by 2022.