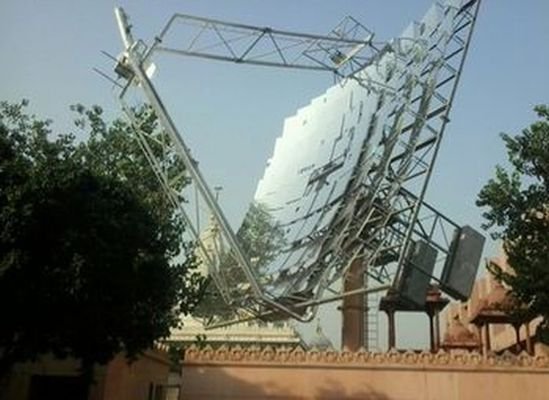 Ramakrishna Mission’s Students’ Home in Mylapore, Chennai had installed solar plant in its premises way back in 2015. This has helped the charitable institution to save on electricity costs as well as reduce monthly consumption of LPG cylinders from 80 to 20-25.

Learning from the past benefits of using solar, they decided to use a solar thermal cooking system, which makes preparing food for 700 boys look like a cakewalk.

120 kgs of rice is cooked every day, and although it may sound as a big effort, it’s all under control because of this system. Along with rice, he also prepares sambhar, rasam, vegetables and dal.

The system generates enough steam to cook an equivalent of 3,500-4,000 meals for the students and residents of the Mission daily.

This is piped to an accumulator, which is connected to the kitchen. The accumulator allows storage of unused steam in a large insulated storage tank. As part of maintenance, the reflector mirrors are cleaned once in two days.

The Mission was also awarded the highest grade of certification by the Indian Green Building Council for its environment-friendly measures.