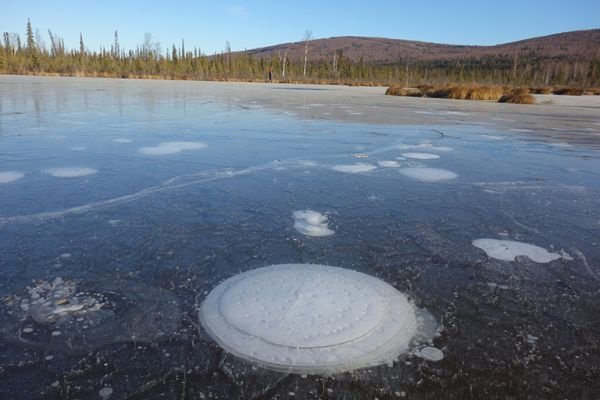 In the past, when a carbon-based life form — such as an animal or plant — died in the Arctic, it froze before it had time to decompose.

Now that temperatures in the region are increasing, however, microbes in the newly thawed Arctic soil are breaking down these previously frozen organic bodies. That releases carbon dioxide and methane into the atmosphere.

Researchers already knew about this process, which they call “slow thawing,” and have been factoring it into their climate models for some time now.

What they haven’t taken into consideration, though, is abrupt thawing.

According to the NASA-funded study, abrupt thawing takes place under thermokarst lakes. When a significant amount of ice deep in the soil melts, the liquid water has less volume than the ice that previously occupied the space underground.

That makes the land slump, making a depression that fills with the water to become a thermokarst lake. Once there’s a liquid lake, the soil around it thaws much more quickly than the typical slow thawing.

One can see the gases bubbling up from beneath these lakes in a video released by NASA.

Based on the researchers’ calculations, abrupt thawing more than doubles our previous estimates of permafrost thaw’s contribution to greenhouse warming.

The team also concluded that we really can’t do much to stop it — even if we reduce our carbon emissions, abrupt thawing will continue to release large stores of methane into the atmosphere.