How Air Pollution Is Adding To India’s Diabetes Burden 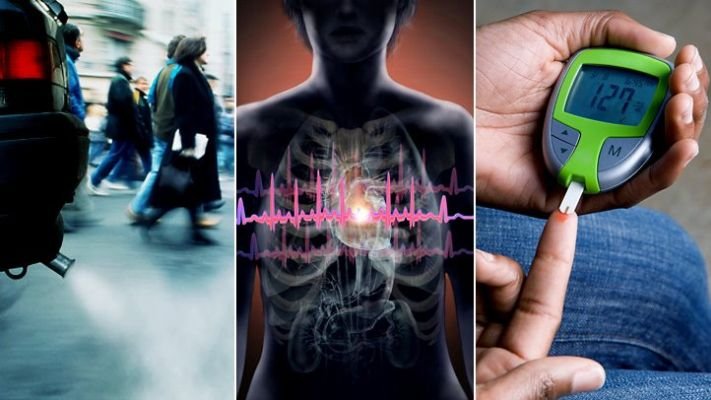 The ill-effects of air pollution on human health have been reported extensively. Some estimates attribute nearly one fourth of all deaths in India to air pollution, particularly exposure to particulate matter smaller than 2.5 microns in size or PM 2.5.  Now a new study by epidemiologists from America, published in The Lancet Planetary Health, has reported that PM2.5 also impacts disease burden of diabetes.

India accounts for nearly half of the world’s diabetes burden with 72 million afflicted people in 2017. The number is projected to double by 2025. The cost of treating diabetes is estimated to be over 15 billion dollars a year in India. States with high per capita income such as Punjab, Karnataka and Tamil Nadu have higher incidence of diabetes. Even urban poor are showing a high propensity for diabetes because of changing lifestyles and food habits. One in four Indians under 25 is diagnosed with adult-onset diabetes. South Asians are also genetically predisposed to diabetes.

Air pollution is not only a major cause of death, especially in developing countries, but is also responsible for increased morbidity of cardiovascular and respiratory diseases as well as reduced cognitive performance and dementia. Even dogs in Mexico City have shown signs of brain damage which was attributed to air pollution. This should make us wonder about mental health of the ubiquitous stray dogs in India breathing toxic air.

The new study linking PM2.5 to diabetes was grounded on tracking 1.7 million US veterans with no prior history of diabetes for 8.5 years. The range of PM2.5 they were exposed to from all sources including firsthand and secondhand smoking ranged from 5 to 22 micrograms per cubic meter of ambient air.

Diabetes risk was found to increase significantly beyond 10 micrograms per cubic meter of air and plateaued at 22 micrograms. The recommended safe level is 10 micrograms.  The measured air quality in Delhi and Kanpur shows levels at 143 and 173 micrograms, respectively.

Based on the relation thus derived between PM2.5 and attributable burden of disease for diabetes, the study has calculated the burden for India. For 2016, the number of deaths attributable to PM2.5 was at almost 6 lakhs. While this may appear small with respect to the total number of people with diabetes, it should be noted that the Disability Adjusted Life Years due to diabetes in the same year was the highest in the world for India at more than 16 lakhs. The number of years of life lost due to premature mortality was about 7 lakhs while years lost to disability was over 9 lakhs. The total impact of PM2.5 on diabetes healthcare cost, productivity loss, and the quality of life can hardly be ignored.

Studies in mice have indicated that PM2.5 can reach the brain from nasal passages via thin cell membranes. The conjecture is that PM2.5 can also make it into the bloodstream and cause liver damage, thus enhancing diabetes risk. It is now established that air pollution can create oxidative stress, meaning it can reduce body’s ability to fight pollutant toxicity and cause damage to cellular structure and DNA. This oxidative stress is found to be higher for smaller pollutants such as PM2.5.

A team led by Rajesh Kumar of the National Center for Atmospheric Research in USA, writing in September 6 issue of journal Nature , has suggested a global network of monitoring stations for air pollution with modeling and interpretation  as well as wide dissemination of real-time air quality forecasts. The researchers have also highlighted the importance of international collaboration and exchanges for training and education in air quality measurements, climate change and use of air quality forecasts. India will stand to benefit from being a full member of such a global network considering that the seasonal monsoon circulation sweeps in air-masses from different regions across its borders.

Many measures such as the right to sports and exercise in Columbia and restrictions on driving and industries on high-pollution days in Chile have had measurable impact on pollution-related mortality and morbidity. The failure of vehicle restriction measures in Delhi in reducing pollution levels must be investigated in the context of the regional monsoon circulation and non-local contributions. Considering that the number of vehicles across India is increasing, additional incentives like improved public transportation, bike sharing programs, exhaust filters, no-driving days, etc., must be encouraged.

The writer is a professor of Atmospheric and Oceanic Science and Earth System Science at the University of Maryland. He is currently a visiting professor at IIT Bombay.