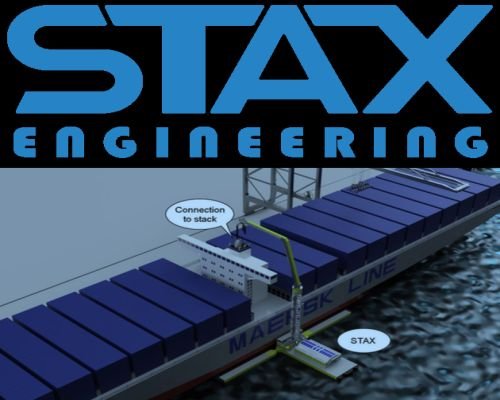 STAX Engineering, has created the world’s only mobile diesel emissions reduction system that removes nearly 100% of all NOx, SOx, PM and most CO2 from both ocean going vessel and land-based exhaust and the best part is, its affordable.

Bob Sharp, the brain behind STAX Engineering, designed a system that attaches to existing combustion sources and removes nearly 100% of the air pollution while also capturing carbon dioxide (CO2).

Where STAX shows much potential is that it uses an economically valuable approach that is highly mobile and removes nearly 100% of particulate matter (PM), NOx (nitrogen oxides), and SOx (sulfur oxides), while also capturing CO2 (carbon dioxide), which is the leading cause of global warming and thus catastrophic climate change.

STAX technology is the superior next-generation near-zero emission alternative to Shore Power and Tier 4 standby generators. One STAX unit connected to a ship at berth is equal to removing 27,000 cars from the road.

“It leaves me scratching my head and asking why it isn’t used globally yet.”