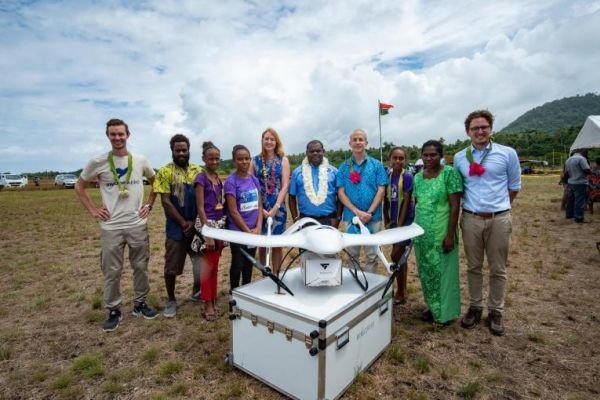 UNICEF, the Australian company Swoop Aero, and the German firm Wingcopter are collaborating on a three-month medical drone pilot project.

Vanuatu, a South Pacific ocean nation with 83 islands. It’s many islands span a great distance, so the delivery of medical supplies typically consumes hours or even days because the modes of transport for the medical workers are walking, driving, flying or riding in a boat.

Drones can fly faster and sometimes more directly to remote areas that need medical supplies. In December, the pilot project’s drones will deliver vaccines to a single island village for several days.

In January, they will drop supplies at health facilities on three islands.

The trial phases are for testing out the drones to see how they perform on the job, and to observe how local people react to them.

It was reported in 2017 that UNICEF was considering the Vanuatu drone project to reach remote health clinics otherwise only accessible by boat. Vanuatu wants to increase its vaccination coverage from 75-85% to 95%.

Despite the challenges of reaching every child in the Pacific, vaccines are protecting more children than ever before. Behind every child who receives their vaccines, lies the hard work of health workers who go from village-to-village to vaccinate children, often traveling over rough terrain, and across vast seas.