E-Waste: Another Growing Menace For India 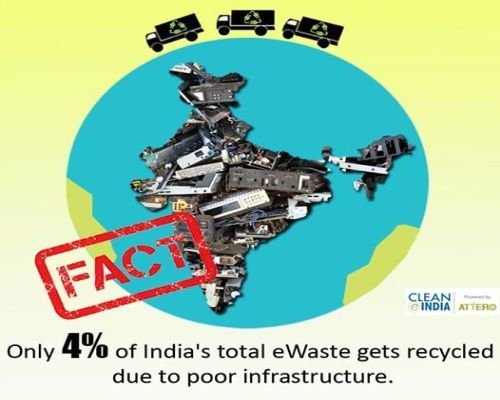 E-waste is generated when electrical or electronic equipment (EEE) is discarded, or returned within warranty, by consumers, and also from manufacturing and repair rejects.

E waste is one of the fastest growing waste streams in the world. The Global E-Waste Monitor estimates that 44.7 million tonnes (mt) of e-waste was generated in 2016. India was the fourth-largest generator (2 mt) in 2016. 82% of india’s e-waste is personal devices.

Moradabad, the peetal nagari (brass city) of Uttar Pradesh is now becoming the largest e-waste hub in the country. E-waste is brought here for recovery of metals such as copper and traces of silver and gold.

Risky and rudimentary ways of metal recovery from the open burning of e-waste components such as circuit boards and wires have choked the city, while panning the hazardous black ash for metals on the riverbanks has polluted the waters of Ramganga.

Moradabad’s air quality index had peaked at 500 in 2017 — the highest reading in the country that year, while the Central Pollution Control Board (CPCB) found heavy metal contamination of surface water, groundwater, soil and sediments in the vicinity of the river.

Management of e-waste requires its dismantling, refurbishment or recycling and safe disposal The E Waste Management Rules 2016 address these issues.

Extended producer responsibility has been mandated this needs to be backed by enforcement of the regulatory framework too.