On Trial Basis – Indian Railway Trains To Have Solar Panels 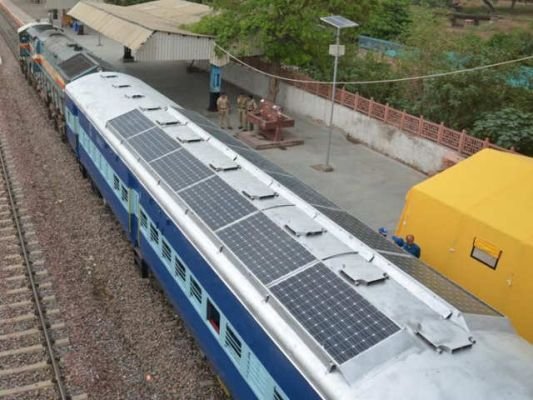 Indian Railways has taken a big step towards clean energy! Piyush Goyal-led Railway Ministry has decided that it will be installing solar panels on the rooftops of general coaches in the intercity trains of Northern and Southern Railways which run for two days.

It will also provide rooftop solar panels for 50% of the narrow gauge coaches plying on the Pathankot-Joginder Nagar route in Kangra Valley section and Kalka-Shimla section of Northern Railways.

This decision has been taken for conducting extended trials of solar panels over rooftop of trains, for one year in all weather conditions.

The system works during sunlight and generates battery backup of approximately 4 to 5 hours. But the panel system does not work properly during foggy weather/rainfall and during winter season. During these weather conditions, the battery backup of solar panels goes down to 2 to 3 hours.

In order to avoid this non-functionality, Indian Railways has decided that the solar panels will be provided on the rooftop of coaches in few trains of Northern and Southern Railways for conducting trials. The trials will be conducted for an extended period of one year, irrespective of weather condition.