Dust Storms Are Adding To Pollution Woes In India 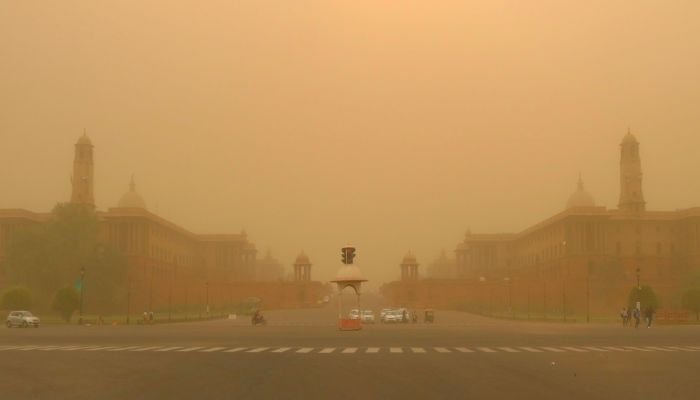 During May 2018, the national capital region and parts of North India were lashed by three strong dust storms in quick succession.

The dust storms led to significant changes in the wind speed, temperature, and patterns of vertical transport of atmospheric parameters, altering concentration of some greenhouse and trace gases that are detrimental to air quality, the study has found.

Two of the three dust storms during May last year were hazardous and killed over 100 people while injuring several hundred more. Dozens of flights were either cancelled or diverted.

Most dust storms over the Indo-Gangetic plains originate in the Arabian Peninsula and Thar desert areas and are known to contain nitrates that get converted into oxides of nitrogen through a process called re-noxification.

Such processes also increase PM2.5 and PM10 and harmful greenhouse gases at the surface that has an adverse impact on human health.

The dust storms have both short and long-term impacts and some of the short-term impacts can have very real consequences for human health. Mainly, the damage to air quality is seen to come from an increase in aerosol concentration, increases in respirable suspended particulate matter like PM 10, PM 2.5 and also temporary fluctuations in tropospheric greenhouse gases like carbon monoxide and ozone.

The extreme heating of land to the north and west of India creates additional winds into India which fuel both widespread floods during the monsoon and dust storms during pre-monsoon months.

These systems can be predicted as they trek into India so early warning systems can definitely be developed.

The findings are based on observations from ground stations, satellite data, radio-sounding data from balloon networks, besides global climate models.

This is a ‘India Science Wire’ story: edited by Clean-Future Team