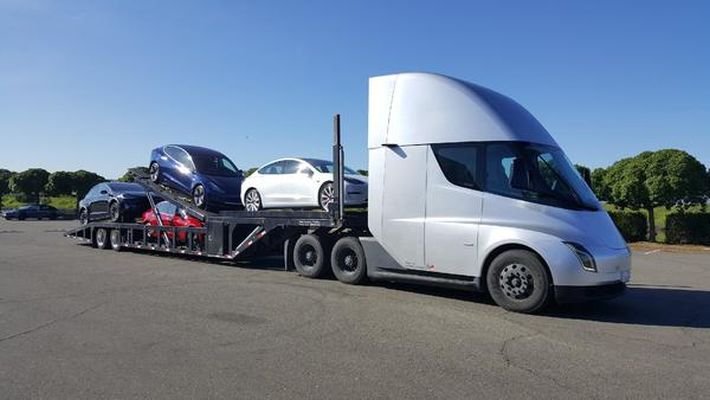 It is carrying large objects (like the company’s own cars) in a zero-emissions truck which is a treat for the entire EV community.

In this latest vignette, Tesla customers awaiting delivery of their cars appear surprised (and delighted) to receive their vehicles via the Tesla Semi. The smiles on the customers’ faces tell the whole story.

In the photo above, we can see that the trailer carrier is loaded with three Tesla Model 3s and a Model X. Performing admirably, it seems like the trailer was tailor-made for this purpose.

The Tesla Semi appears to be fully loaded with autonomous features, as prototypes are said to be equipped with around 26 cameras.

The giant battery of the Tesla Semi, the capacity of which is unknown at this time, is charged via 4–5 Supercharger stalls at once.

However, with Tesla’s Supercharger V3 advances, this might change or Tesla could be working on a wholly separate Megacharger for it. No one knows how the final iteration of charging for the Semi will unfold.

Tesla’s much anticipated Semi Truck could signal the future of the freight industry — Fortune 500 companies and corporations have already placed hundreds of pre-orders for these futuristic trucks.