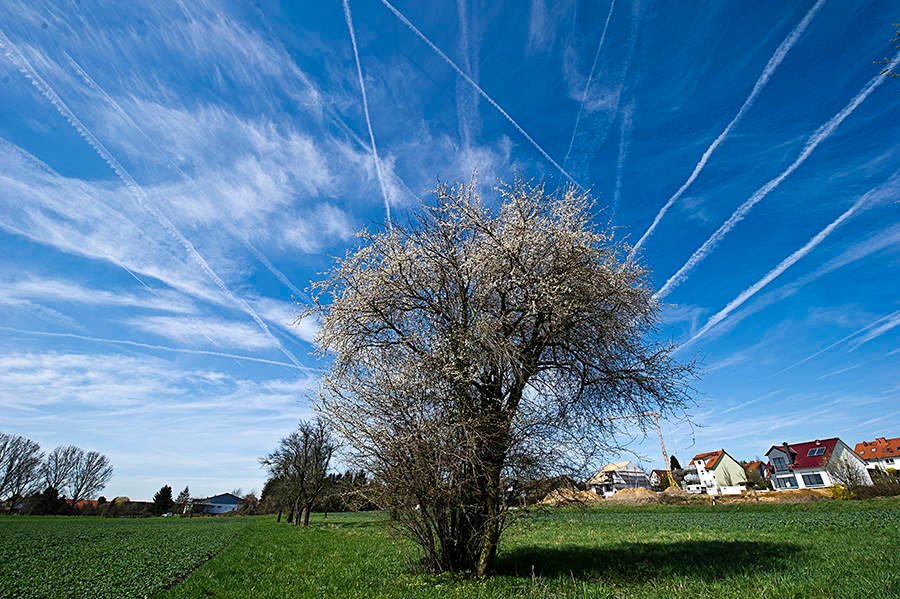 According to a study by the Institute of Atmospheric Physics in Germany the contrails left by aeroplanes which last only for couple of hours are now so widespread that their warming effect is greater than that of all the carbon dioxide emitted by aeroplanes that has accumulated in the atmosphere since the first flight of the Wright brothers.

All aircraft that burn fuels leave behind a trail of exhaust fumes and soot. At high altitudes, water vapour often condenses on the soot particles and freezes to form a cirrus cloud that can persist for seconds to hours, depending on temperature and humidity.

Clouds can have both a cooling and warming effect. They reflect some of the sun’s rays back into space, but also block some of the heat radiated by Earth’s surface. On average, both thin natural cirrus clouds and contrails have a net warming effect.

Worse still, this non-CO2 warming effect is set to triple by 2050. Altogether, flying is responsible for around 5 percent of global warming.

If air travel isn’t lessened by 2050, the warming effects of these contrail clouds will even outweigh the warming caused by airplanes’ carbon dioxide emissions.

The one bit of good news is that as contrails become more common, they reduce natural cirrus cloud formation by using up all the water available. This cuts the overall warming effect attributable to contrails by a fifth.