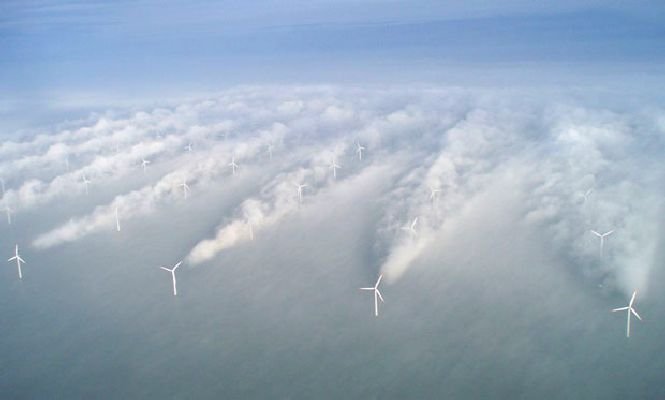 Race cars and Sailboats leave eddies of disturbed air in their wake, thus slowing down the one behind.

Researchers at Stanford have taken a look at how the wake from wind turbines can interfere with the efficiency of other turbines in the area and discovered that turbulence can decrease the efficiency of turbines down wind by as much as 40% or more.

In an experiment at a wind farm in Alberta, Canada, the researchers repositioned the wind turbines so the turbulent air they created had less of an effect on other turbines in the area — a process they call wake steering.

The research is preliminary but encouraging, especially at a time when variability of renewable energy resources makes the case for keeping peaker plants operational.

First, the Stanford group developed a faster way to calculate the optimal misalignment angles for turbines. Then they tested their calculations in collaboration with TransAlta Renewables, the operator of the Alberta wind farm.

The overall power output of the farm increased by up to 47% in low wind speeds — depending on the angle of the turbines — and by 7 to 13% in average wind speeds.

Wake steering also reduced the ebbs and flows of power that are normally a challenge with wind power. In the study, wake steering reduced the very short-term variability of power production by up to 72%.

The next step is to run field tests for an entire year. This would give them enough data to conclusively come up with a strategy to optimize the aerodynamics, power production and even land-use for wind farms everywhere.