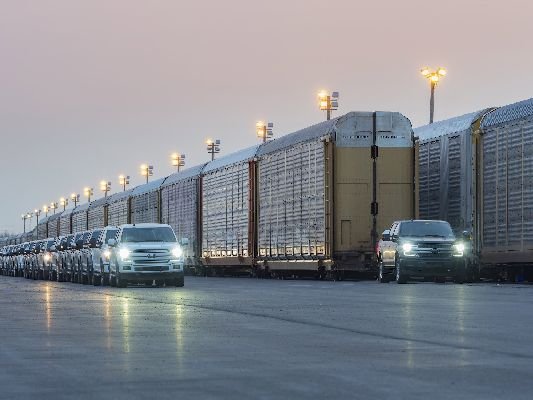 A properly configured Ford F-150 pickup truck can tow 13,200 pounds. A key reason why the best-in-class F-150 has been the best-selling vehicle in the US for 42 years.

But Ford might do something unprecedented with towing capacity when its all-electric F-150 debuts in a few years.

How unprecedented? Staggeringly, if a recent demonstration of a prototype all-electric F-150 is any indication.

Ford hitched the pickup to a one-million-pound (roughly 454,000 kg) line of railcars and easily pulled the load for 1,000 feet. In a neat reference to the pickup’s heritage, Ford measured the distance with 42 gas-powered F-150s, symbolizing the four-plus decades of sales dominance.

As if a million pounds weren’t impressive enough, Ford then drove those 42 F-150s onto the railcars and towed everything again, another 1,000 feet.

The total weight on the second run was 1.25 million pounds (roughly 567,000 kg). The prototype was basically a freight locomotive.

It’s unlikely that any future electric F-150 owner would need to pull a train up a mountain. But the demonstration – using an existing F-150 body outfitted with the electric drivetrain that Ford has been developing and is now testing – provided a hint at what the capabilities of the new pickup might be.

At the moment, Ford isn’t divulging any technical details about the electric F-150, but the car maker has obviously zeroed in on a well-established feature of electric drivetrains: instant torque.

Electric motors have access to all of their torque as soon as they start cranking.

With this demonstration, the market, got a glimpse of what to expect when the hybrid-electric F-150 arrives next year.