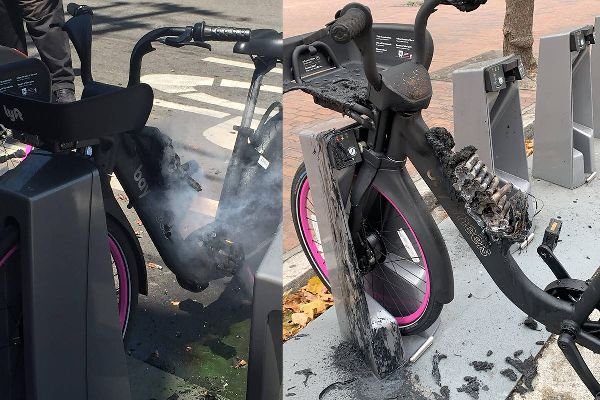 Lyft said in a statement that it is “temporarily making the e-bike fleet unavailable to riders in San Francisco while we investigate and update our battery technology.”

However, it didn’t clarify whether it will pull all of the e-bikes from the streets or leave them parked but disabled.

In April, the company pulled its e-bikes in the city because their sensitive brakes were sending riders flying over the handlebars. Lyft then sued San Francisco in early June over a contract dispute, delaying the return of the bikes until the pair reached a temporary resolution earlier this month.

And now, just two weeks after redeploying its e-bikes in the Bay Area, Lyft is pulling them again — this time because they’re spontaneously catching fire.

The San Francisco Fire Department responded to Wednesday’s incident and determined that it was a “battery pack issue.

The e-bike that caught fire on Wednesday was docked near Page and Scott streets and at around noon a witness saw flames coming from the battery.

And another e-bike, also operated by Lyft, apparently caught fire on Saturday at Folsom and Second Streets.

Lyft’s San Francisco e-bikes are only the latest electric mobility device to go up in smoke, raising questions about whether the batteries on the vehicles are safe.

In March, Lyft’s New York City bikeshare operation, called Citi Bike, experienced its own fire reportedly caused by e-bike lithium-ion batteries that were connected to a charging station in Brooklyn.

These incidents are “really disturbing” because in my opinion e-bikes are a Eco-friendly alternative to driving.