Getting Solar Power Without Losing Farmland 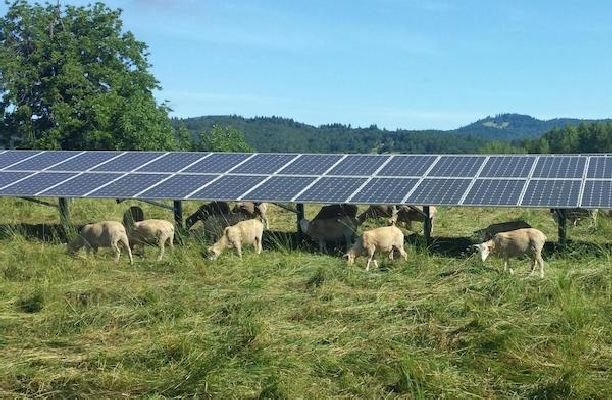 Solar power only accounts for about 1% of US electricity production now, but it could shoot up to 30% by 2030 if the deep decarbonizationers have their way.

Researchers at Oregon State University (OSU) have discovered that localized microclimates can exert a strong influence on solar cell efficiency. The solar power research site is located at the school’s Corvallis campus and is a an actual grazing area with actual sheep on it.

Applying their findings to different types of land, the research found that croplands, grasslands, and wetlands would provide more potential for optimizing solar power than barren land.

That’s topsy-turvy from the conventional consensus on solar power, which focuses on barren, desert-like conditions, if not actual deserts.

The idea that solar panels can coexist with active, commercially viable farm use is gaining ground as the evidence is beginning to pile up.

It turns out that by raising solar panels a bit higher, you can get shade and moisture retention benefits for some uses.

The US Department of Energy has a handy farm-to-solar web page that outlines how farmers can benefit, including:

In a nutshell, the researchers found that their research site — a 1.5 megawatt solar power installation on an active sheep grazing field — exhibited improved efficiency associated with the above mentioned four elements.