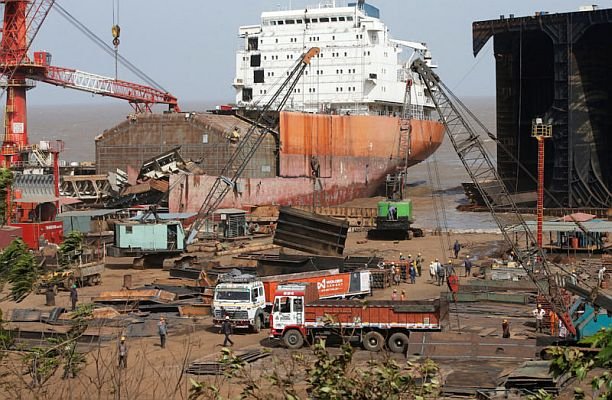 With a new legislation in place, India eyes to garner at least 60 per cent of the global ship recycling business and emerge as a key destination for recycling warships and other ships.

The Shipping Ministry is confident that the contribution from ship recycling activities to the country’s GDP would reach USD 2.2 billion, almost double compared to the current level.

Currently, India recycles around 300 of the 1,000 ships which are demolished per annum globally. However, countries like Japan, Europe and the US were not sending their ships for recycling to India in the absence of ratification of a global convention.

That scenario is set to change with the Recycling of Ships Act, 2019.

The Act ratifies the Hong Kong convention and facilitating environment friendly recycling process of ships and adequate safety of the yard workers.

India, Bangladesh, China and Pakistan account for recycling about 90 per cent of the global ships.

India’s share at present stands at 30 per cent or 70 lakh gross tonnage of ships per annum which is bound to go to at least 60 per cent given 95 of the 131 plots at Alang, Gujarat are being developed as per Hong Kong conventions, paving way for ships from Europe, Japan, US and other countries to be recycled here.

The Act is expected to raise the brand value of ship recycling yards located at Alang in Gujarat, Mumbai Port, Kolkata Port and Azhikkal in Kerela and will also enhance availability of steel.

This is part of ongoing major reforms, so as to achieve Modi government’s commitment towards making India a USD 5 trillion economy.