Scorpion-The Return Of The Electric Moped 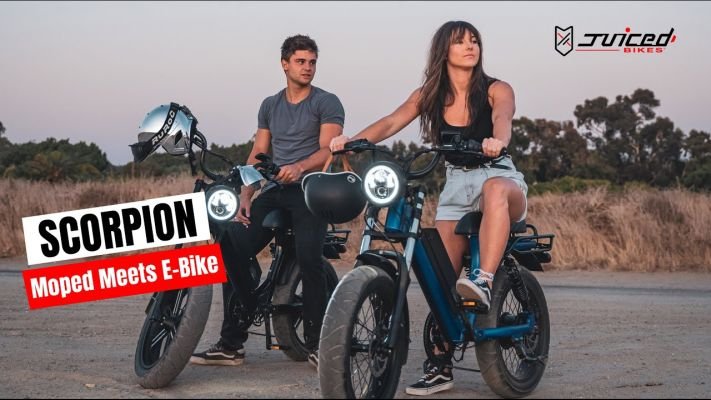 Southern California-based Juiced Bikes saw the evolution of the e-bike and built the Scorpion as the embodiment of the modern moped. For starters, it packs a rather standard 750-watt Bafang hub motor on the rear hub that, while it is rated for 750 watts of average power output, regularly exceeded 1,000 watts of power in hilly terrain.

The higher power output is possible thanks to the fact that the moped is built on a 52 volt system underpinned by a 13 Ah battery. Every bit of the power of the motor is held ready and waiting to support the rider.

It comes in to support the rider as a standard pedal assist system, adding a bit of extra boost when the pedals are moving or at the twist of the throttle.

The Scorpion takes this power to the max, with a 28 mile per hour top speed and an estimated range of 45-70 miles per charge. Combined with its throttle, this puts the Scorpion in an interesting grey area when it comes to e-bike classifications.

The motorcycle-style dual suspension of the Scorpion is also geared towards comfort rather than off road performance. Combined with its 20″ x 4″ puncture-resistant fat tires, the Scorpion provides an impressive amount of comfort, but the suspension is just a bit too bouncy for any sort of downhill sprints.

The headlight are massive and contributes to the looks a lot more like a motorcycle than a bicycle. It’s functional as well, with an impressive 2,000 lumens of output, it is clearly more than just a prop.

On the pricing front, the Juiced Bikes Scorpion is available for preorder today at $1,899 today, with the first bikes shipping in July 2020.

This is a Businesswire Feed edited by Clean-Future Team