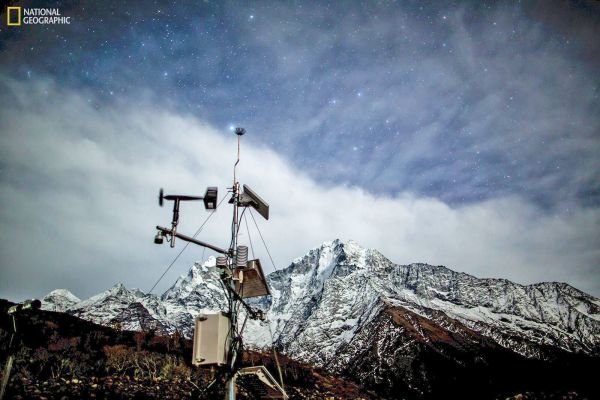 For anyone who scoffs at the notion that solar panels work in cold weather, check out this new weather station sitting on the Balcony just below the rather chilly summit of Mount Everest.

The Station was installed last May and it is still the world’s highest weather station at 27,657 feet above sea level. Only the summit of Mount Everest, just a few hundred feet up the road, is higher.

Baker Perry of Appalachian State University and the expedition team applied previous experience in the Andes to help prepare for the task. They used two 10-watt solar panels from the company Campbell Scientific which had supplied them the equipment for Andes expedition also.

As we know that solar panels lose efficiency when they are too warm, so anything that keeps them cool is a plus. Another factor that improves efficiency is the reflective effect of snow and other light-colored surfaces on solar panels.

However, during the monsoon season, somewhere around the end of July into early August, the panels stopped producing as efficiently.

Anyways no harm, no foul. Balcony Station continued to collect data throughout. After the winds picked up later in August the solar panels resumed normal function, and the station was able to transmit the data to researchers.

The Balcony Station has been in place for a relatively short time, but Perry took note of at least one important bit of information already gleaned from the data:

“We have exceptionally high values of incoming solar radiation — not totally unexpected at high elevations but it’s important combined with glacier behavior and recognition that even up at extreme elevations that because of the solar radiation melting can occur even though air temperatures are well below freezing.

“The broader implication includes the fact that many of the glacier models are really just based on air temperature. They’re not including some of the other processes including intense solar radiation. Our findings can help improve these models.”

“These glaciers may be at more of a risk than initially anticipated,” he concluded.