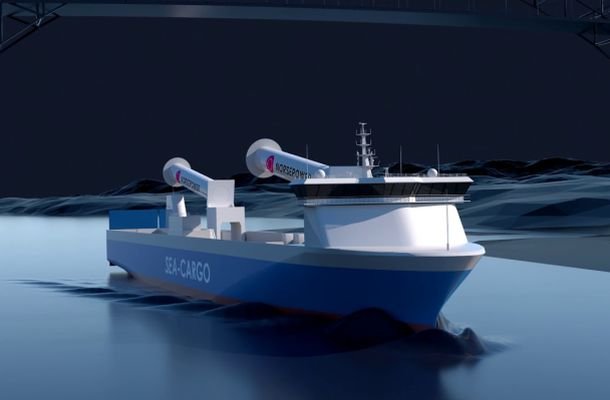 Since being launched in 2014, Norsepower Rotor Sails have been installed on three vessels, resulting in a reduction of their CO2 output by an estimated 5000 tons. A fourth installation is already planned for 2020.

Meaning! As of last year, Rotor Sails had been installed on only three vessels in five years, so it’s about time for Norsepower to pick up the pace — and it looks like they’re doing just that, only now it tilts.

The word “sail” is used loosely in this context. Norsepower’s Rotor Sails look nothing like sails or, for that matter, wind turbines. As a matter of fact, they look like smokestacks, only with no smoke.

This week the company announced a Rotor Sail installation agreement with Sea-Cargo, which happens to be a top North Sea logistics firm. The agreement calls for two Rotor Sails to be installed on a single cargo vessel named SC Connector, sometime before the end of this year.

Why this is a News? Because for the first time in history, Norsepower plans to ’tilt sails’ as the ship passes under a power line or a bridge. The two sails are each 35 meters high and 5 meters wide, so there will be a lot of tilting going on.

However, Norsepower’s use of lightweight, composite cylinder materials should ease some of the mechanical burden on the operation.

As for what the Rotor Sail is, Norsepower explains that it is a “modernised version of the Flettner rotor, a spinning cylinder that uses the Magnus effect to harness wind power to thrust a ship.”

The size and number of Rotor Sails to be installed are tailored to match the vessel’s operating profile, and to provide a versatile and safe solution.

According to Norsepower, the SC Connector should be able to reduce its carbon emissions by 25% after the Rotor Sails are installed. Sea Cargo also anticipates that vessel can run on wind power alone when conditions are ideal.