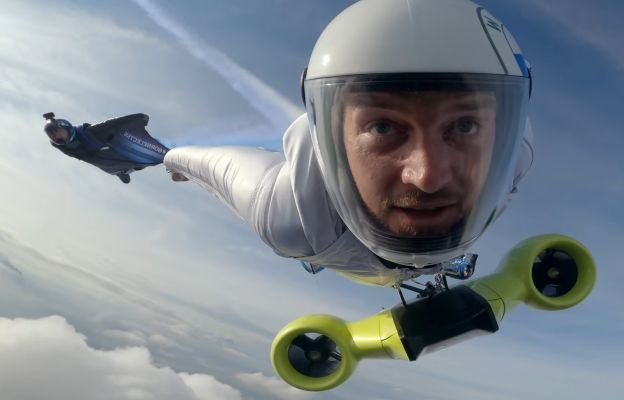 Engineers at German carmaker BMW’s Designworks studio have created a chest-mounted set of electric impellers that allow a wingsuit to accelerate to a blistering 186 mph.

The chest mounted system has two 5-inch (13-cm), 25,000 rpm impellers in a relatively compact but still pretty chunky unit that has a bit of a submarine kind of look to it.

The wingsuit was designed to incorporate air inlets for the propulsion system. There’s an on/off switch, a two-finger throttle and a kind of steering facility, as well as a cutoff switch for emergencies.

It’s more of a physical thing to fly than a regular wingsuit; you need plenty of core and limb strength to fight the wind and control your motion in the air.

However, rather than just gliding, like a conventional wingsuit, the BMW propulsion system can put out 20 horsepower, allowing its wearer to actually gain back altitude — albeit only as long as the suit’s limited charge lasts.

The maniacal invention has already been tested in specialized wing tunnels and has been used during 30 test jumps.

During its first public demonstration, the suit allowed stuntman and daredevil Peter Salzmann to zip past the Del Brüder mountain peaks in the Austrian Alps.

It’s still unclear if BMW will ever build such a wingsuit for the general public. The amazing invention seems to be largely a PR push for the carmaker’s latest electric SUV, the iX3.