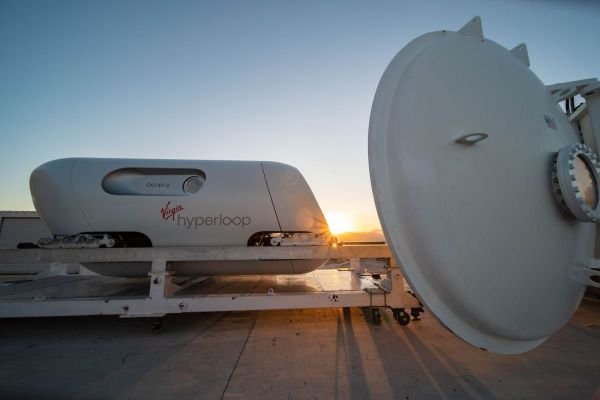 Transportation history was made today in the Nevada desert, where Virgin Hyperloop tested human travel in a hyperloop pod for the first time.

Sara Luchian, Virgin Hyperloop’s director of passenger experience, and Josh Giegel the project’s co-founder, rode the futuristic levitating pod through a 500-meter test track, accelerating up to 107 mph in just 6.25 seconds, rivaling some of the fastest production cars ever made.

The occupants made their maiden voyage on the newly-unveiled XP-2 vehicle, designed by BIG – Bjarke Ingels Group and Kilo Design, which was custom-built with occupant safety and comfort in mind.

While the production vehicle will be larger and seat up to 28 passengers, this 2-seater XP-2 vehicle was built to demonstrate that passengers can in fact safely travel in a hyperloop vehicle.

The testing campaign, from the beginning stages all the way through to today’s successful demonstration, was overseen by the industry-recognized Independent Safety Assessor (ISA) Certifer.

Having undergone a rigorous and exhaustive safety process, the XP-2 vehicle demonstrates many of the safety-critical systems that will be found on a commercial hyperloop system and is equipped with a state-of-the-art control system that can detect off-nominal states and rapidly trigger appropriate emergency responses.

Although still plenty of questions remain, surrounding the financial viability of such an expensive mode of transportation.

Besides some key investments by several countries around the world and a small number of other test tracks, the first operational Hyperloop track has yet to be built.

And rather than navigating through air unobstructed, plenty of land also has to be claimed to build out routes.