Azure Power Is Painting Green Energy With Red In Assam 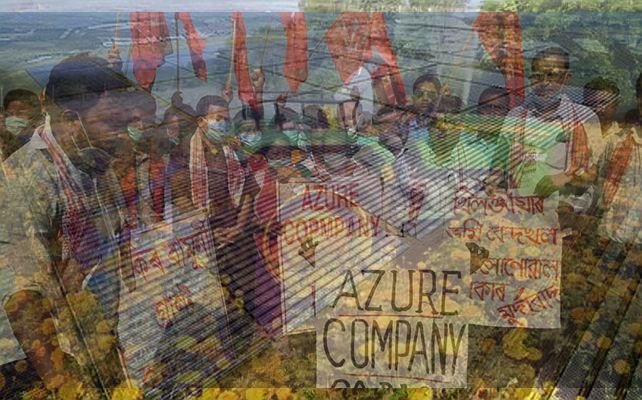 Azure Power Forty Private Limited has bought 276 bighas of land from the erstwhile zamindar’s family who was originally granted the Mikir Bamuni Land Grant cluster of villages in Nagaon district of Assam.

However, since the so-called “acquisition” of this land, a series of false claims by state officials have come to light, including the illegality of sale of this land, procedural fallacies and inconsistencies have been exposed.

The land sold to Azure Power is part of the Mikir Bamuni Land Grant. The specific origins of this land grant may be found in the archives, but the Gohain family that sold the land to Azure Power points to the caste hierarchy and its close relationship with land holdings typical to the feudal conditions of lower Assam.

This region is marked by large zamindaris, of which Mikir Bamuni is one such holding.

However, these feudal land conditions were challenged by the Assam (Temporarily Settled Areas) Tenancy Act 1971, according to which a tenant who has held and cultivated a piece of land for more than 3 years has the right of occupancy, an inheritable right that can only be transferred to another agriculturist.

Ignoring these claims and the rights of the farmers, Azure Power purchased the land from a handful of individuals belonging to a single family, descendants of the erstwhile zamindar family.

Meanwhile, for its part, Azure Power claims “the land acquisition has been done fairly and lawfully with due consultation with all the stakeholders”.

Having deemed the land barren and waste with no cultivation in the last 10 years, the revenue department converted the land classification from agricultural to industrial land for the purpose of setting up the power plant.

Despite the matter being subjudice, the company has bulldozed its way over the ripened crops of farmers to carry out construction work under heavy police protection.

As state forces unleash brute violence on the farmers, Azure Power claims it is moving forward “lawfully”. The myth of ‘green’ energy must be broken.

“We would not like to transition to a green future which is soaked in blood red.”