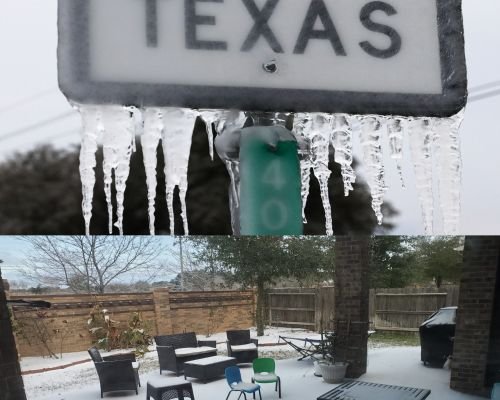 Texas is freezing. That’s a problem for ERCOT, the organization that manages the utility grid in much of the state. The record low temperatures led many Texans to plug in their portable electric heaters to stay warm.

That, in turn, made the demand for electricity higher than expected. And just as demand spiked, some wind turbines froze and several gas-fired generating stations tripped offline.

High demand and low supply led to chaos, while frozen wind turbines were part of the problem, frozen controls at gas fired facilities were a far bigger problem.

The Texas grid is built to power air conditioners in the summer. It is not built to power an army of electric space heaters in the winter. It could have been designed to do so, but backup and redundancy cost money.

A warming climate is destabilizing the jet streams. The current conditions in Texas are historical, certainly generational, but this can’t be hand-waved away as if it’s entirely natural.

And what is causing the jet stream to become unstable?

If you said global warming you are bang on target. Temperatures are rising twice as fast in the Arctic than they are elsewhere around the globe.

The crisis in Texas was not caused by the state’s renewable energy industry. The largest loss of generation came from gas-fired power plants, with the drop-off from wind farms a long way behind.

The answer is not building more and more thermal generating stations that spew more climate warming pollution. It is designing smarter, more resilient grids that leverage the capabilities of renewable energy. It’s time to wake up and design the energy generating and distribution networks we will need tomorrow.